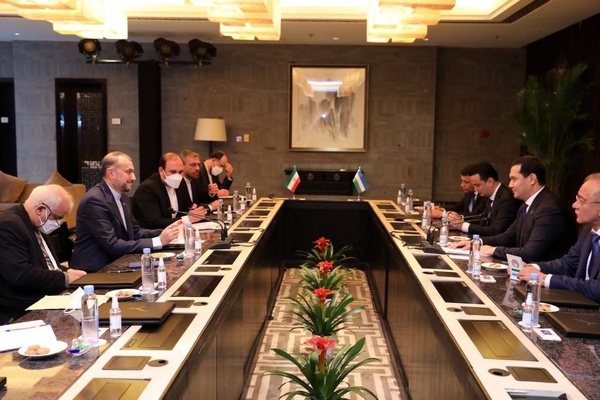 The Iranian foreign minister says the US should act realistically regarding the Vienna talks over the revival of the Iran nuclear deal.

Hossein Amir Abdollahian added everything, now, hinges on whether the US wants to act realistically or take responsibility for the collapse of the negotiations in the Austrian capital.

The meeting between Amir Abdollahian and Sardor Umurzakov was held on Thursday evening on the sidelines of the third ministerial meeting of Afghanistan’s neighbors in China.

The two sides discussed bilateral relations and key regional issues.
During the meeting, the Iranian foreign minister congratulated Umurzakov on Nowruz, as a common heritage of regional countries and expressed his pleasure on the progress in the relations between the two countries, especially following the meeting of the joint commission for economic cooperation.

He also explicated on the approach of the government of the Islamic Republic of Iran on neighborly ties and conveyed the greetings of the Iranian president to his Uzbek counterpart.

Amir Abdollahian also described as significant the existing potential for cooperation between the two countries in the sphere of bilateral ties, especially in the fields of economy, transportation and transit as well as tapping deeper into existing potential offered by the Iranian Port City of Chabahar and Khaf-Herat railway.

The foreign minister also expressed Iran’s readiness for greater cooperation in the fields of technology and knowledge-based companies.

He underlined the great significance of the bilateral ties in different fields and talked about the existing potential for cooperation between the two countries, and highlighted Uzbekistan’s willingness to implement agreements with Iran.