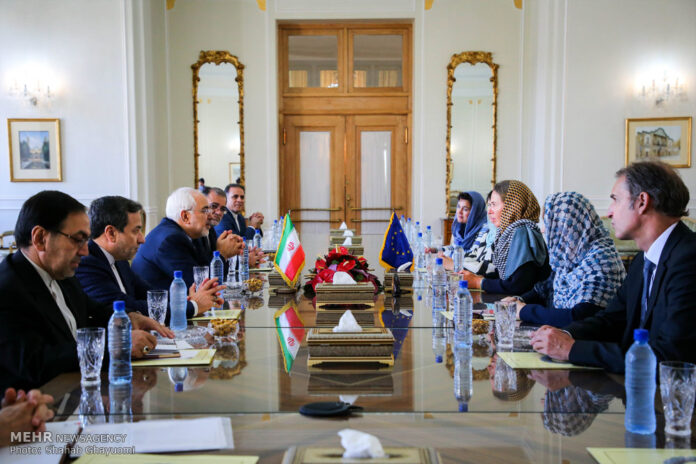 In a Saturday meeting with EU Foreign Policy Chief Federica Mogherini in Tehran, Iranian Foreign Minister Mohammad Javad Zarif called on the European Union to be vigilant in the wake of Trump’s move to sabotage the nuclear deal between Iran and world powers.

During the meeting, issues related to implementation of Joint Comprehensive Plan of Action, relations between Iran and the European Union, and the situation in the region were discussed.

Referring to the problems created by the United States in the course of implementation of the JCPOA, Iran’s Foreign Minister noted that the new US administration is seeking to prevent the Islamic Republic of Iran from enjoying the advantages of the JCPOA.

Zarif described the US move as a violation of the nuclear deal’s text, and said, “Trump tries to breach the deal with Iran paying the costs, but Europe needs to be alert in this regard.”

He also referred to Iran’s missile tests and the launch of the scientific satellite ‘Simorgh’, saying that these measures are not in contradiction to the UNSC Resolution 2231.

He also criticized the recent statement of the three European countries jointly issued with the United States, saying it is a movement in wrong direction.

For her part, Mogherini expressed her pleasure of participating in the swearing-in ceremony of President Rouhani, saying that the international community has common interests with Iran in implementation of the JCPOA.

“The European Union strongly supports the JCPOA, and this is the common position of all European countries. The EU’s position on this is clear, and we are trying to have the US next to us because all of us need wise and proportionate measures,” she stressed.

Expansion of Iran’s cooperation with the EU in various fields, especially in the economic areas, was underlined in this meeting.

The regional issues, Syria and the Astana Process negotiations, developments in the Persian Gulf, the situation in Yemen and the need to address the plight of the people in this country, besides the situation in Bahrain, Iraq, and fight against ISIS Takfiri terrorism were among the other topics discussed by the two sides.