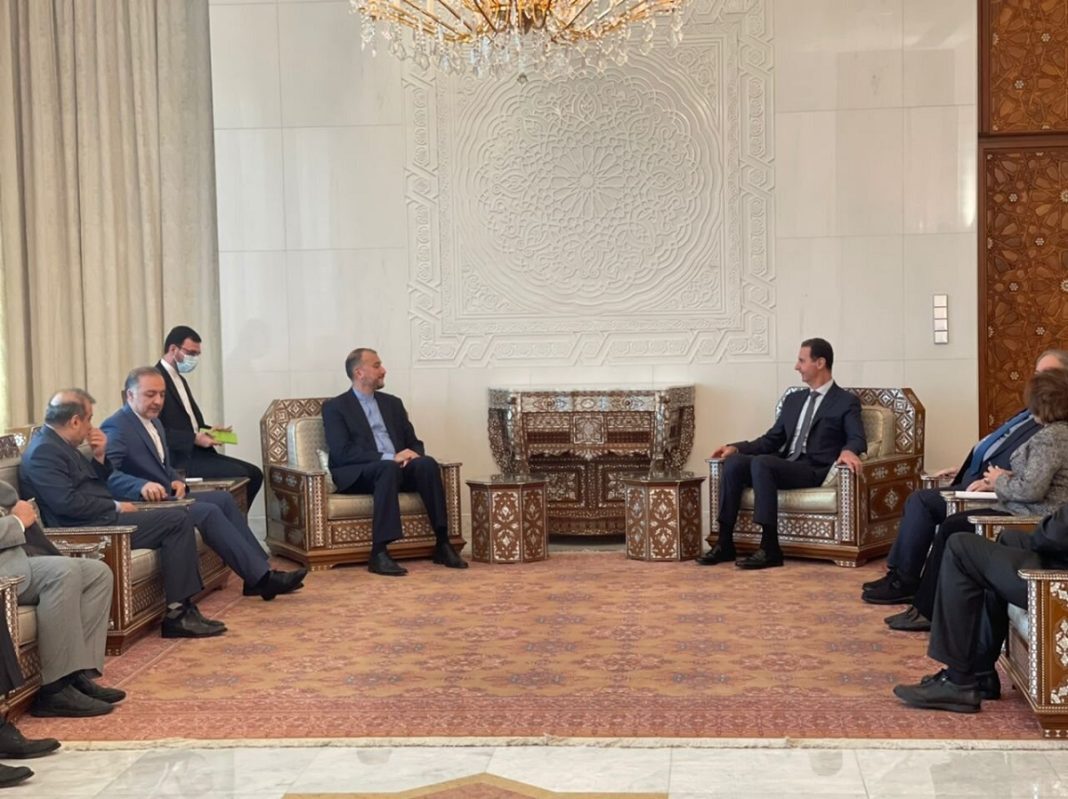 The Iranian foreign minister, in a meeting with President Bashar al-Assad of Syrian, has voiced Tehran’s full support for the government and people of Syria. The meeting was held on Wednesday in Damascus.

Amir Abdollahian congratulated Assad on Syria’s political and field successes and underlined the Islamic Republic of Iran’s continued support for the government and people of Syria.

The top Iranian diplomat said in the realm of economic and trade cooperation between the two countries, a new chapter has begun in relations.

Amir Abdollahian added that the expansion of economic cooperation between Iran and Syria is seriously on the agenda of bilateral relations, and that Tehran and Damascus are considering easing transportation and transit between the two countries.

The foreign minister maintained that in this regard, popular interactions and exchanges between Iran and Syria are also important.

Amir Abdollahian welcomed the trend of the normalization of ties between regional countries and Syria.

He further referred to the common views of Iran and Syria about many of the regional and international issues, underlining that as for regional tensions, the Islamic republic opposes any war and supports resolution of disputes through dialog and political means.

Amir Abdollahian added that in light of this policy, Iran wants the Yemen crisis to be resolved through talks between Yemeni factions and it believes that a change in the behavior of some regional countries can pave the way for finding a solution to the Yemen crisis.

He then spoke of the developments in Ukraine, stressing, “We oppose both war and sanctions. The Ukraine crisis can only be resolved through political means.”

As for the Vienna talks, Amir Abdollahian maintained that Iran and the other parties to the negotiations are close to a deal but despite their claim that they are interested in the settlement of disputes and reaching a deal, the Americans must show their good will in action.

In the meeting, Syrian President Bashar al-Assad also referred to the dramatic developments in the region, saying after the US defeat in Afghanistan, and especially after the developments in Ukraine, it has become clear that Washington and NATO could not advance their agenda in the world.

Therefore, he added, regional countries are after new alliances as a replacement for the US support.

Assad then referred to double standards on the part of some countries, saying they are have not taken a position on the Zionist regime’s attacks against Syria and are keeping silent in this regard.

The Syrian president rejected as baseless, the US officials’ claims that Washington has goodwill and described the Islamic Republic of Iran’s stance in the Vienna talks as wise and sound.

Assad then stressed that what is important for Damascus is Iran’s views on the Vienna talks and Syria’s support in this regard.