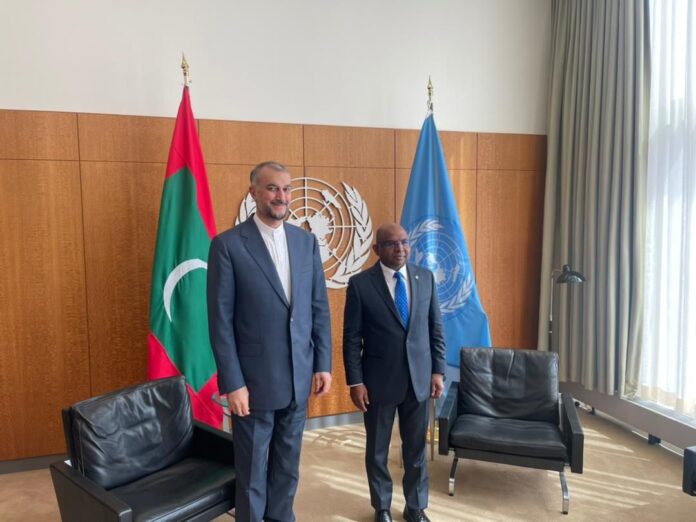 The Iranian foreign minister, in a meeting with the president of the UN General Assembly, said sanctions have turned into a terrorism tool against nations and that the world body is expected to stand up to U.S. unilateralism and lawlessness by strengthening multilateralism.

The meeting between Hoseein Amirabdollahian and Abdulla Shahid took place on Thursday on the fringes of the assembly’s 76th session in New York.

Amirabdollahian congratulated Shahid on his appointment as the president of the UN General Assembly and invited him to visit Tehran.

Referring to the importance of the role of the United Nations, the Iranian foreign minister emphasized the support of the Islamic Republic for UN missions and the mission of the president of the General Assembly, and wished him success in his tasks, including the fight against terrorism.

Noting that terrorism is today plaguing the world, Amirabdollahian said the assassination of General Qassem Soleimani, the great general of peace, by the United States on Iraqi soil is one of the most blatant manifestations of this terrorism.

Abdollahian said a legal and international committee has been set up inside Iran to follow up on the assassination with the aim of bringing the perpetrators of this assassination to justice, but the United Nations certainly has an important role to play in this regard.

During the meeting, the top Iranian diplomat touched on the constructive role of the Islamic Republic of Iran in cooperating with the regional governments in the fight against terrorism, from Lebanon to Iraq and Afghanistan.

He expressed regret that the United States, despite its slogans, has linked economic terrorism to health and medicine terrorism, and stressed the need for a serious response from the international community to this approach.

The president of the UN General Assembly also congratulated Amirabdollahian’s appointment as foreign minister and described as unforgettable his visit to Tehran to attend the summit of the Organization of Islamic Cooperation in 1996.

Shahid described the multilateral system as the only path and choice for the international community, saying that the coronavirus pandemic showed how interconnected countries are and that no one will be safe until everyone is safe.

Shahid called the United Nations and its General Assembly the best mechanism ever developed in the field of multilateralism. He also stressed that the General Assembly is making every effort to be successful in fulfilling its missions.