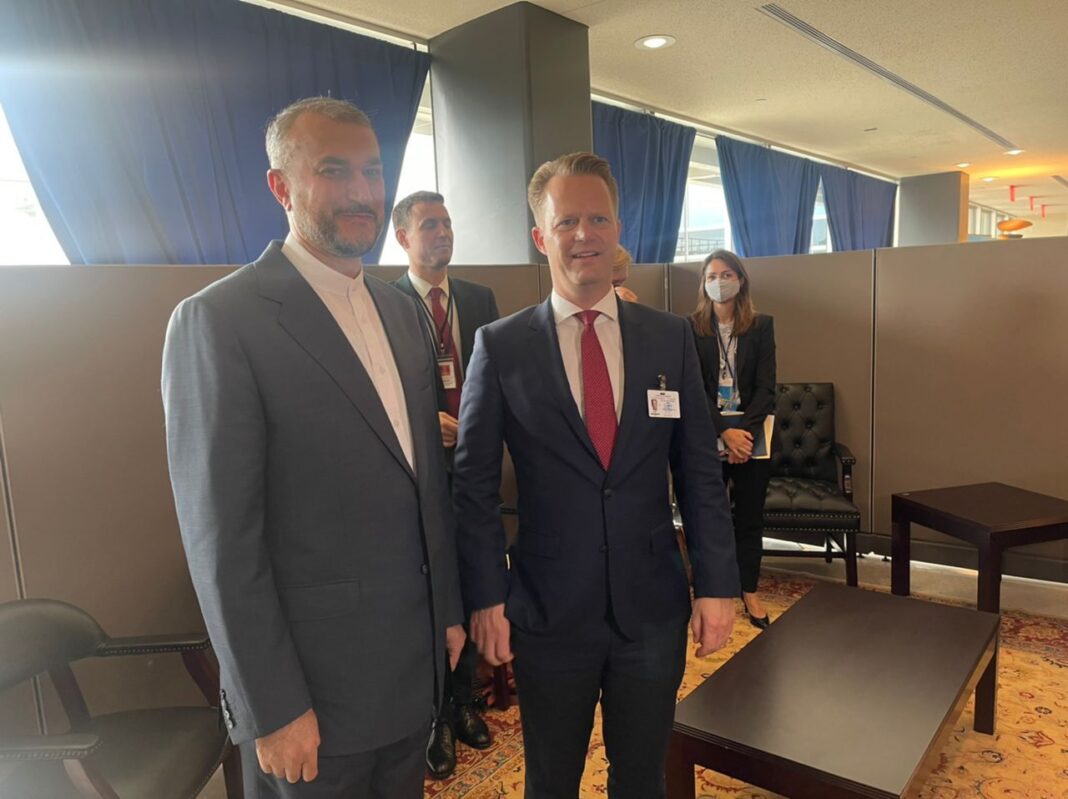 Iranian Foreign Minister Hossein Amirabdollahian, in a meeting with his Danish counterpart, said the presence of some of terrorist elements in Denmark is unacceptable.

The meeting was held on the sidelines of 76th session of the United Nations General Assembly on Thursday, during which the top Iranian diplomat called for the application of a single standard for dealing with terrorism.

Iran’s foreign minister referred to the new administration’s interest in establishing balanced relations with different countries, including those in Europe, and stressed the expansion of cooperation in various fields such as environment, renewable energy, medicine, veterinary and health, and appreciated Denmark’s production of pen insulin in Iran.

Amirabdollahian expressed readiness to review relations and design a path for further development of bilateral relations. He said activating the capacities of the joint commission of the two countries and reopening direct flights between Tehran and Copenhagen will help achieve those goals.

In another part of his talks with his Danish counterpart, the Iranian foreign minister referred to the sanctions and said the current U.S. administration has continued the path of the previous administration in imposing illegal and oppressive sanctions against the Iranian people, and this is contrary to the claims heard from Washington on a daily basis that they want to return to the JCPOA.

Of course, although these sanctions have caused limitations, they have failed to create obstacles in Iran’s creative trade relations with the outside world, and this is an opportunity for both countries, Amirabdollahian added.

Regarding Afghanistan, Amirabdollahian announced the Islamic Republic of Iran’s readiness to cooperate with Denmark to send the necessary aid to Afghan people.

The Danish foreign minister also expressed his desire to expand cooperation, saying that unilateral sanctions against the Iranian people are not acceptable adding that at the same time it is necessary to resume the Vienna talks as soon as possible.

Jeppe Kofod thanked Iran for its important measures in helping with the evacuation of foreign nationals from Afghanistan.

Denmark has allocated $80 million for humanitarian aid and a part of that must go to Afghan refugees, he said.

During the meeting, the Danish foreign minister emphasized his government’s support for regional consultations in the Persian Gulf.

It should be noted that Amirabdollahian also raised some consular issues regarding the problems of Iranian citizens in Denmark. The Danish foreign minister welcomed joint consular cooperation to solve the problems.