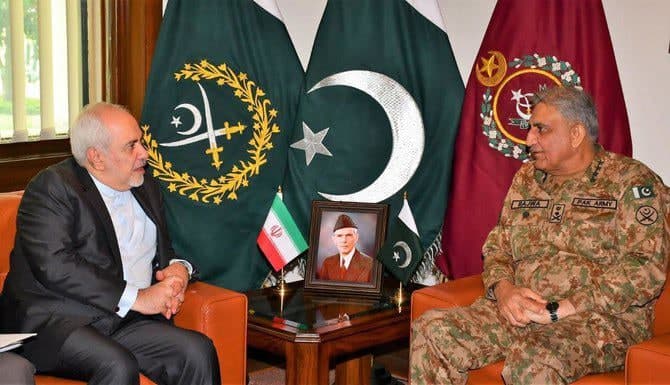 Iranian Foreign Minister Mohammad Javad Zarif and Chief of the Army Staff of Pakistan General Qamar Javed Bajwa weighed plans for the promotion of military cooperation between the two neighbours.

Foreign Minister Zarif, who is leading a political, economic and military delegation in a visit to Islamabad, held a meeting with the top Pakistani commander on Wednesday.

In the meeting, the two officials expressed satisfaction with the political, military and regional cooperation between Iran and Pakistan, stressing the need for the promotion of bilateral relations in all fields.

Highlighting the close military cooperation between Iran and Pakistan, Foreign Minister Zarif hailed the measures adopted at the common border for strengthening border security as the two countries are opening new border crossings.

Foreign Minister Zarif also announced that the Islamic Republic of Iran will be opening the Rimdan border crossing in the southeastern province of Sistan and Baluchestan within the next week.

The top Iranian diplomat further expressed hope that Pakistan would in turn open the Gabd border crossing, and that the other border crossings, including Pishin-Mand, would come into operation gradually for the expansion of people-to-people and trade interactions between the two countries.

For his part, General Qamar Javed Bajwa emphasized the importance of political and military cooperation between the two countries, stressing the need for the promotion of mutual cooperation in all fields.

The top general also voiced support for the Pakistani government’s decision to open border markets and various crossings along the common border with Iran, including the Rimdan-Gabd and Pishin-Mand crossings.