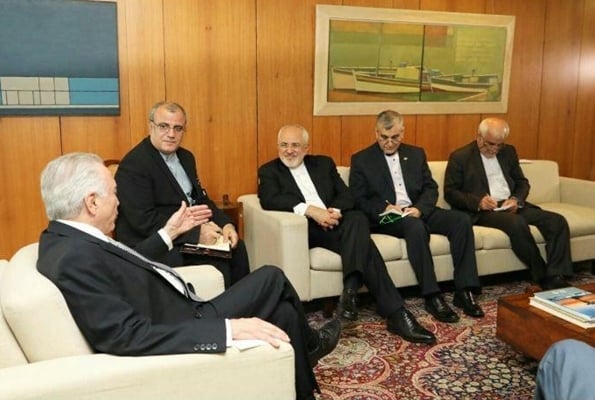 Iran’s Foreign Minister Mohammad Javad Zarif, at the end of his visit to Brasilia, held a meeting with Brazilian President Michel Temer before leaving the country for Montevideo.

Speaking in the Tuesday meeting, Zarif pointed to the current level of bilateral trade between the two states and called for efforts to deepen economic relations and achieve balance in bilateral trade.

The foreign minister said the two countries could engage in cooperation in energy, transit, agriculture and high-tech fields, adding that considering the progress of the two countries, they could be complementary to each other.

Among other issues raised by Zarif in the meeting were using national currencies in bilateral trade, accelerating the establishment of a Brazilian credit line for Iran, engaging in oil and gas cooperation, and implementing joint projects in new fields such as nanotechnology, biotechnology and aerospace.

Zarif thanked the Brazilian government for extending support to Tehran’s right to peaceful nuclear energy, calling for continued political dialogue and exchange of views between the two countries.

Temer, for his part, said Brazil is eager to expand ties with Iran and develop cooperation with the country in high-tech fields, calling for the exchange of delegations and closer contacts between the two countries.

The president said Brazil has no problem with the expansion of Iran’s peaceful nuclear activities and it supports them.

The Brazilian president said there is possibility for closer cooperation in oil and gas fields, adding that exchanging political and economic delegations between the two countries will help deepen relations between them.

After the meeting, Zarif left the Brazilian capital for Uruguay, the third leg of his four-nation tour, which earlier took him to Senegal, and will later end in Namibia.