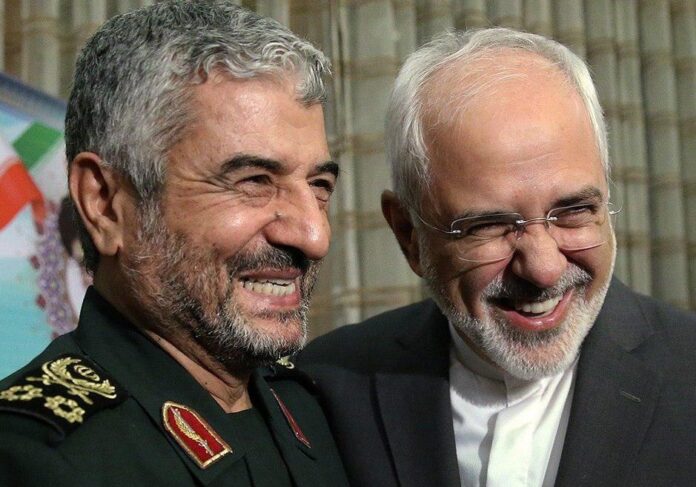 Commander of the Islamic Revolution Guards Corps says the IRGC and the Iranian foreign ministry are united in countering the country’s enemies.

IRGC Chief-Commander Major General Mohammad Ali Jafari noted on Monday that the foreign ministry and the IRGC are coordinated in declaring their stances against enemies of the Islamic Republic even if they express the positions in different ways.

Speaking in a ceremony also attended by Iranian Foreign Minister Mohammad Javad Zarif in Tehran, General Jafari said the enemies of the Islamic Republic are well aware that all officials in Iran’s Establishment are unanimous in defending the country’s values, causes, national power, and defensive capabilities.

Zarif, for his part, referred to IRGC as an honour for the country, and a guarantee for defending Iran, survival of the 1979 Revolution, and protecting the country’s borders.

He further reiterated that Tehran will take reciprocal measures against a potential “strategic mistake” by US President Donald Trump to designate the IRGC as a terrorist organization.

“Some measures have been thought out in this regard and will be taken at the appropriate time.”

“The policy of Trump’s administration has been to deprive Iran of the JCPOA’s benefits, but through our policies, we will not allow the US to make such a move. We have been successful so far in this regard and will respond [to US actions] with proper measures in the future,” the top Iranian diplomat pointed out.

Earlier on Sunday, the IRGC chief commander had noted that Iran would treat US troops like ISIS terrorists if the IRGC was designated as a terrorist organization by the US.

Iran’s reaction came a few days before the US president’s expected announcement of a final decision on his Iran strategy.

Trump is reportedly planning to “decertify” on October 15 the nuclear agreement, known as the Joint Comprehensive Plan of Action (JCPOA), reached between Iran and the P5+1 group of countries in 2015.

According to media speculations, the US president plans to declare that the nuclear deal is not in the national interest of the United States and kick the issue to a reluctant Congress. He is also expected to designate the IRGC as a terrorist organization.