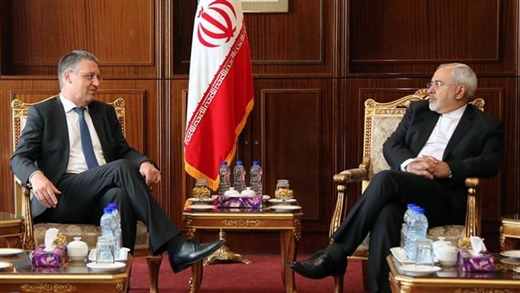 “Germany, contrary to certain European and Western players, holds no negative view to the existing realities in the region,” Zarif said in a meeting with Markus Ederer, the state secretary of Germany’s Federal Foreign Office, in Tehran on Tuesday.

“Such a view is regarded as an important factor for [those] extra-regional players that seek peaceful solutions to solve regional crises,” the Iranian minister added.

He also stressed the importance of constant consultations between Iranian and German officials on political, economic, cultural and parliamentary issues.

In a separate meeting, Iranian Deputy Foreign Minister for European and Americas’ Affairs Majid Takht-e Ravanchi reaffirmed Iran’s commitment to its obligations under the country’s nuclear agreement with six world powers, known by its official title as the Joint Comprehensive Plan of Action (JCPOA).

Takht-e Ravanchi said the six global powers are expected to seriously fulfill their obligations, particularly with regard to financial and banking affairs.

Ederer is in Tehran to hold talks with senior Iranian officials on the latest bilateral, regional and international developments.

Earlier on Tuesday, the German diplomat held a meeting with Ali Akbar Velayati, a senior adviser to Leader of the Islamic Revolution Ayatollah Seyyed Ali Khamenei.