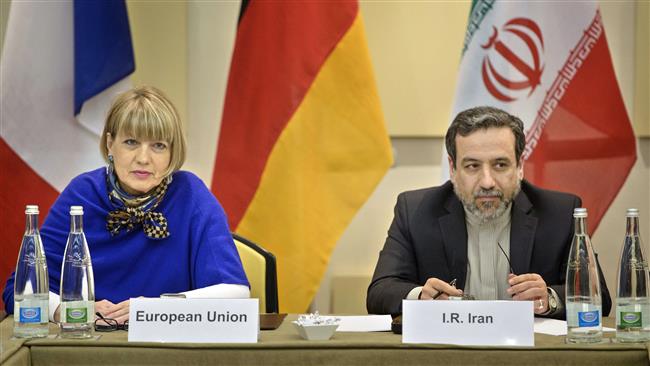 Senior Iranian officials have met with the European Union (EU)’s deputy foreign policy chief a day before a planned meeting with representatives from all P5+1 member states over the closure of all past and present issues regarding the Iranian nuclear program.

A joint commission comprising the Iranian officials and their counterparts from P5+1 group of countries – the United States, Britain, France, China, and Russia plus Germany – is to convene in the Austrian capital on Monday.

Iran and the world powers concluded a nuclear agreement, dubbed the Joint Comprehensive Plan of Action (JCPOA), in Vienna on July 14. Under the JCPOA, limits are put on Iran’s nuclear activities in exchange for, among other things, the removal of all nuclear-related economic and financial bans against the Islamic Republic.

On the same day, Iran and the International Atomic Energy Agency (IAEA) signed a roadmap for “the clarification of past and present issues” regarding Iran’s nuclear program.

P5+1 countries must now submit a resolution, as per Article 14 of the JCPOA, to the IAEA Board of Governors for the closure of the file of the so-called possible military dimensions regarding the Iranian nuclear program. The board’s approval of the resolution would seal the case.

The Monday meeting is set to discuss the draft of the resolution prepared by P5+1 countries.