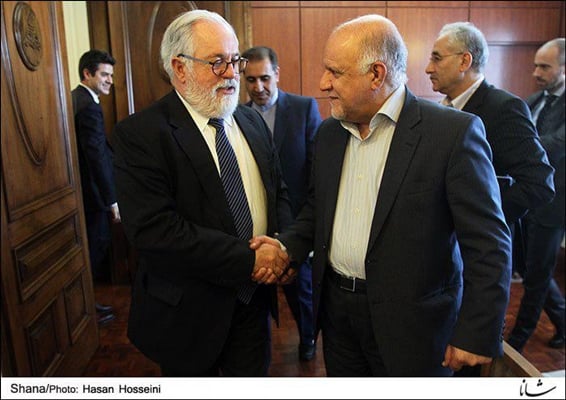 “In this working group, we will try to come up with solutions to allow Iran to keep the level of its oil [exports] intact,” Canete said after a meeting with Iran’s Oil Minister Bijan Zangeneh on Saturday.

Zanganeh has vowed Tehran would spare no efforts to maintain its oil production and exports at current levels, and predicted it would overcome the difficulties resulting from the US withdrawal from the nuclear deal.

Despite the tough diplomatic efforts, however, the chances of the Iran nuclear deal surviving the impact of US sanctions were dealt a blow when the Danish shipping group A P Moller-Maersk said it was joining an exodus of companies ceasing commercial activity in Iran.

Maersk, the world’s largest oil shipping container firm, said on Thursday it would honour customer agreements entered into before 8 May, but then wind them down by 4 November, as required by the re-imposed US sanctions.

The announcement came after the French oil firm Total announced on Wednesday that it was going to pull out of its 50.1% stake in the South Pars 11 oil field. Total said it would only retain its investment if the US gave it a specific exemption from the planned sanctions. Its joint venture partners in China are likely to take over its share of the investment.

Iran’s oil exports were at 1m barrels a day, mostly to Asia and some European countries, before sanctions were lifted. They subsequently climbed to 2.5m barrels.