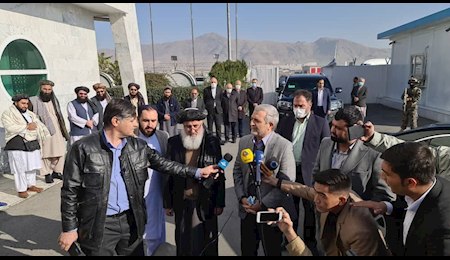 Iran’s special envoy for Afghanistan says the US occupiers who fled Afghanistan are trying to expand their proxy terrorist groups in the region.

Hossein Kazemi Qomi underlined the need for joint fight on terrorism and security cooperation with Afghanistan.

He added that the Afghan people threw out the occupiers with their resistance.

Kazemi Qomi was speaking upon arrival in Kabul on Monday for talks with the Taliban.

He said the Iranian-Afghan border must be safe.

Kazemi Qomi said the Afghan people in fact triumphed over the evil schemes of the enemy, adding “The Islamic Republic of Iran stood by the Afghan people during the two-decade US occupation and will continue down that path”.

The Iranian envoy for Afghanistan said it’s now time for reconstruction in Afghanistan and Iran will help the country in this way.

Kazemi Qomi said both countries are under the oppressive US sanctions but their long border allows them to have lucrative trade cooperation.

He expressed hope that an inclusive government will be formed in Afghanistan, noting that he will discuss security and trade issues during his stay in Kabul. Afghanistan’s acting Economic Minister Din Mohammad Hanif, who welcomed Kazemi Qomi at the airport, described Iran as a good neighbor and said he hopes ties between Tehran and Kabul will further expand following the visit of the high-ranking Iranian delegation to Afghanistan.