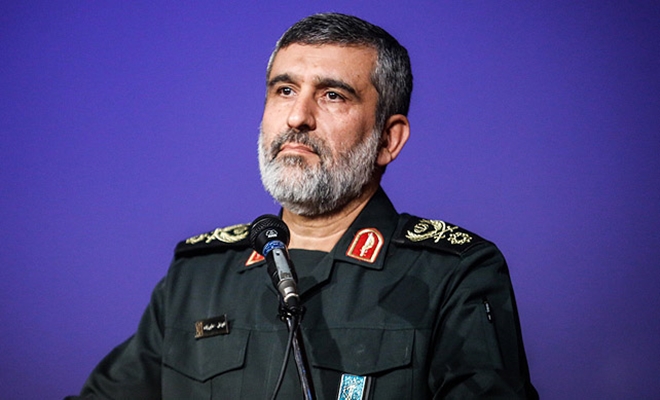 The commander of the IRGC aerospace force says that the Islamic Republic carries out its space work without attracting much attention because the enemy seeks to monitor it.

Brigadier General Amirali Hajizadeh says the launch of the “Noor” satellite was a super project because sending satellites into space is a tough job, but the essence of the work was to remove many barriers in this technology.

In a televised speech on Thursday, he said without being present in space, you are deprived of many large-scale military and civilian facilities, stressing, “The fifth dimension of military affairs, after land, sea, air, and cyber, is space.”

Moreover, the commander of the IRGC Aerospace Force emphasised, “The limitations we have in the land and air for intelligence dominance are much less in the space. When we launched the satellite, we controlled it from Tehran, Zahedan and Chabahar stations. After 90 minutes, the satellite turned once around the earth, and then we received the signal in the northwest of the country. In the next 3 to 10 days, some of its commands will be defined and its settings will be completed to be used fully.”

Regarding the necessity of the IRGC’s entry into space, Hajizadeh said in 2009, with the approval of the Leader of the Islamic Revolution, the IRGC Air Force changed its name into Aerospace Force.

“Since that day, we have established a command post as a space command, and extensive measures have been taken over the past eleven years.”

Naturally, we are looking to develop this command. As our missile command began in 1984 with two pads and today it has become a military power, God willing, the day will come when our space command will find a special status in the country, both in the defence and non-defence sectors, added Hajizadeh.

“In the Noor satellite, the engine of the first stage burnt liquid fuel because we wanted it to be inexpensive. Now that our job is performed, we will use solid fuel for the first stage engine. We did this launch with a mobile launch pad, which means we don’t need a fixed launch pad, and all of this makes the costs lower.”

He further underlined any country that reaches this stage in the space technology is considered a superpower.

Regarding the impact of this project on the country’s defence power, he said, “The Americans are angry, so it shows the importance of this project. They know we have a new ability, and they are upset.”

Elsewhere in his statements, Hajizadeh talked about Ain al-Assad attack, stressing that when the IRGC was firing missiles at the base, it assumed the Americans will respond; therefore, 400 spot were determined to hit.

In the end, he expressed hope that the next satellite be placed in a higher orbit, of course using the expertise of Iranian youths and knowledge-based companies.