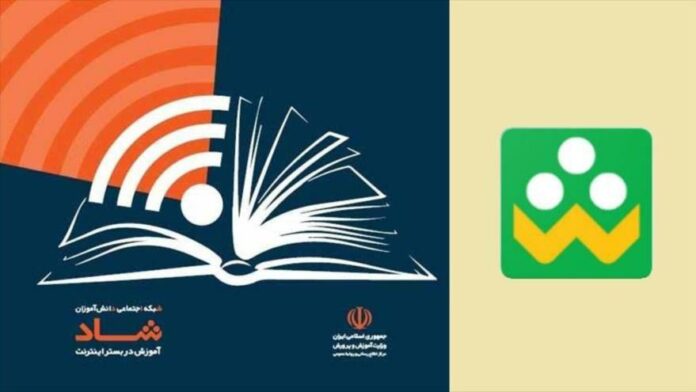 While the coronavirus pandemic has shut down schools for weeks and has forced people to stay home to prevent the spread of the disease, the Iranian Ministry of Education has launched a homegrown mobile application, dubbed SHAD (HAPPY), providing students with distance learning programs.

One week after the outbreak of coronavirus led to school closures across Iran in February, the Islamic Republic of Iran Broadcasting (IRIB) began to broadcast televised educational programs on a daily schedule.

However, Education Minister Mohsen Haji-Mirzaei complained that a televised program was not capable of coping with the demands of students, since it does not provide an interactive learning system.

“It was necessary to devise a method to enable the students to have an experience of an atmosphere like the classroom in the virtual space, and enable the teachers to have two-way interaction with their students in the platform of virtual space and handle the question and answer process and the exams just like how they did in the classroom,” Haji-Mirzaei said at a televised program aired on IRIB channel 2.

He said the Ministry of Education released the homegrown SHAD application on April 9, noting that more than 60 percent of students and 94 percent of teachers have so far attended 64 percent of classes through the SHAD app, whose acronym in Persian translates as the Students Education Network.

The minister explained that the Supreme Council of Cultural Revolution had assigned the Ministry of Education to formulate such distance learning initiative years ago, when it had ratified the document on the fundamental evolution in the education system of the Islamic Republic of Iran.

An opportunity to implement the tele-learning system in Iran had never arisen, either because of lack of the necessary infrastructure or the lack of need for a mobile application, Haji-Mirzaei added, noting that his ministry has now turned the coronavirus threat into an opportunity and provided the students with a domestic app in the virtual space after creating the necessary infrastructures and developing the required software.

Criticisms
Despite all of its advantages, the initiative launched by the Ministry of Educations has also drawn criticism. Critics say the low-income families and the vulnerable social groups cannot afford to purchase smart phones and tablets, or many remote cities and villages lack appropriate infrastructure or the Internet connection.

The latest figures provided by the Statistical Centre of Iran show that at least 8 million people in Iran have no mobile phone, while more than 23 million people are still using non-smartphone handsets.

The breadwinners of many families in Iran have been out of work after the coronavirus outbreak or their income has dropped. Many of those families have more than two schoolchildren, and it is impossible or quite difficult for them to purchase the gadgets to use the SHAD application.

A group of those families are striving to get a loan of one million tomans (approximately $64) from the administration, while another group is roaming the black market of second-hand and repaired mobile phones to buy a cellphone at an exorbitant price from dealers.

In their interviews, the Iranian Education Ministry authorities maintain that the relatively high penetration rate of the Internet in Iran implies that the majority of Iranian students have access to SHAD application. Nevertheless, the statistics show that a large number of Iranian families are struggling with a bigger problem in using the educational app: they do not have smart phones.

After the media reports about the inability of the low-income social groups to buy smart phones for installing the SHAD application, the secretary general of the Ministry of Education’s Supreme Council announced in an interview with ILNA that SHAD app is only one of the various methods adopted for education and distance learning.

“However, this method (SHAD) entails problems, which we are trying to identify and solve,” the official noted.

Asked about the plans to provide schooling for the students without a smart phone, Education Minister Haji-Mirzaei said at a TV talk show, “The establishment’s mission is to provide schooling and education for all children. We have started to implement different distance learning methods for the students that are unable to use the SHAD educational network for various reasons.”

The minister explained that educational packages have been prepared and distributed by the educational guides among students in certain areas, such as the border regions and the underprivileged areas in the provinces of Kermanshah, Ardabil, West Azarbaijan, and Kurdistan.

Moreover, the teachers have begun to teach in the low-population classes in compliance with the social distancing rules, the minister added.

“Learning from television was also another method that has proved quite effectual when the students have no access to the SHAD app, and has been welcomed. So, what is important for the Education Ministry is to provide education cover for all students,” Haji Mirzaei concluded.