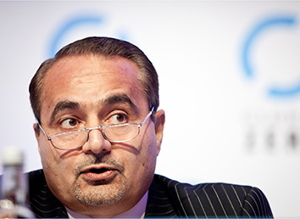 A former Iranian diplomat has said that the international community is strongly defending the deal Iran clinched with P5+1 in July.

Former Iranian diplomat Hossein Mousavian said Sunday that the Iran nuclear deal is the most inclusive text in the world’s nuclear history that can ensure non-proliferation of nuclear weapons.

Mousavian, who was addressing a gathering of 5,000 people in New York, touched upon terrorist claims against Iran and said, “The bitterest terrorist incident for you Americans was the attack on Twin Towers on September 11, 2001. Was there an Iranian among the culprits of that incident or all the criminals were citizens of US allies, such as Saudi Arabia?”

Noting that all people in the world unanimously believe that today the number one threat to global security is Takfiri terrorism, Mousavian said that terrorist groups such as ISIL, al-Qaeda, Boko Haram and al-Nusra Front recruit their members from citizens of US allies in the Middle East, Africa, Europe, America and China.

The Iranians have not joined these groups, they are on the frontline of practical fight against these terrorist groups, Mousavian said.

He said that the international community is strongly defending the Iran deal and only Netanyahu and some US congresspersons are standing against the deal and certain regional hostile Arab countries are trying to scupper the deal.

“The American people should know that Mr. Obama had only three choices in dealing with Iran’s nuclear crisis: peaceful agreement through diplomacy, sanctions and pressure, or military invasion,” Mousavian said.

“The world did not support a war scenario. In addition, the US had experienced two wars in Iraq and Afghanistan and had been forced to leave the war incurring thousands of billions of dollars in losses with more than six thousand Americans being killed”.

Obama knew well that military action against Iran would have consequences more severe than that of US invasion of Iraq and Afghanistan, Mousavian said.

On exerting pressure on Iran, the former Iranian nuclear negotiator said that Obama imposed the toughest sanctions on Iran aiming to shut down Iran’s nuclear program, but the Iranians, instead, developed their nuclear program to let the US know that Iran would not surrender under pressure.

When the US got to know that the option of sanctions would also backfire, they chose diplomacy for dealing with Iran’s nuclear dispute, Mousavian concluded.