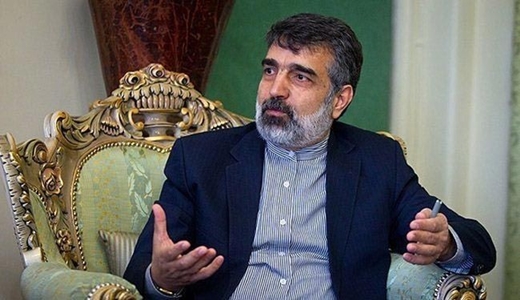 Kamalvandi said oppositions to the talks have created difficulties both for Iran and other negotiating countries in the course of nuclear negotiations.

Kamalvandi who was speaking at a ceremony in Tehran to unveil a book titled From Sa’adabad to Lausanne, said these oppositions have created difficulties both for Iran and other negotiating countries in the course of nuclear negotiations.

‘From Sa’adabad to Lausanne’ is a book written by Mohammad-Saeed Ahadian, managing editor of Khorasan newspaper, which focuses on the conduct of Iranian nuclear negotiators over the years.

Kamalvandi said the author has tried to keep an impartial and unbiased view to the nuclear negotiations.

Kamalvandi also hailed the importance the author attached to the role of the Supreme Leader in the nuclear issue.

He said that the author rightfully differentiated between US President Barack Obama and the US government.

‘I don’t mean to approve of Obama because he has admitted he wants to dismantle Iran’s nuclear facilities, but it should be noted that Obama’s positions are different from those of the US government on the whole,’ Kamalvandi said.

However he said he disagreed with the author that it was former president Mahmoud Ahmadinejad and Ali Akbar Salehi who proposed direct talks with the US.

He said Salehi called for direct talks with the US and the Supreme Leader accepted his proposal.

‘If Ahmadinejad made further cooperation in these talks, things would have been much better,’ Kamalvandi said.