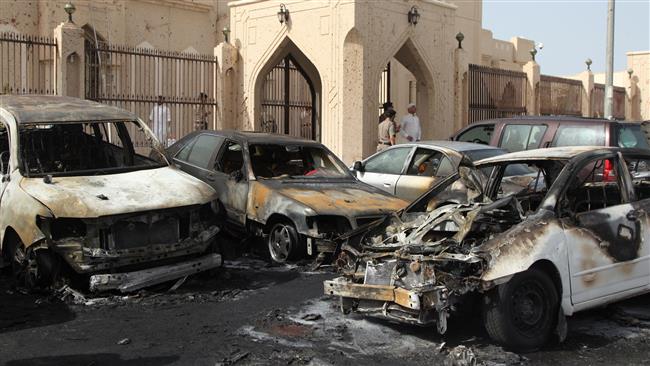 All measures should be taken to prevent such incidents and combat those who have targeted the security and stability of the region by provoking religious strife, FM spokeswoman Marzieh Afkham said.

The Islamic Republic of Iran has condemned a recent deadly terrorist attack against Shia worshippers in Saudi Arabia’s Eastern Province.

All measures should be taken to prevent such incidents and combat those who have targeted the security and stability of the region by provoking religious strife, said Iran’s Foreign Ministry spokeswoman Marzieh Afkham on Friday.

Amnesty International also denounced the act of terror as cruel and unjustifiable.

“Members of Saudi Arabia’s Shia Muslim community have been subjected to cruel attacks during Friday prayers for the second week in a row. There can be absolutely no justification for attacking worshippers in a mosque,” said Deputy Director at Amnesty International’s Middle East and North Africa Program Said Boumedouha.

The activist called on Saudi officials to carry out a “transparent” probe into the incident and adopt serious measures to protect the Shia minority in the kingdom, saying Riyadh must translate into action its words in condemnation of terrorism and extremism.

“Unless the Saudi Arabian authorities are transparent about the investigations they are carrying out into these atrocities, and unless they take serious and effective steps to end discrimination and advocacy of hatred against the Shia, it will fuel perceptions that they are looking the other way while sectarian tensions and violence against Shia intensify,” Boumedouha stated.

“The authorities… must do more to protect members of this community from further violent attacks,” he went on to say.

According to reports, thousands of people took to the streets in the Qatif region of Eastern Province to protest against the terrorist attack.

The demonstrators accused the government in Riyadh of failing to protect the Shia population in the Arab country.

Earlier in the day, a car bomb attack targeted the Imam Hussein Mosque in Dammam, the capital city of Saudi Arabia’s Eastern Province.

The attack came a week after another Takfiri element blew himself up at the Imam Ali Mosque in Qatif, killing 21 people and injuring 97 others.