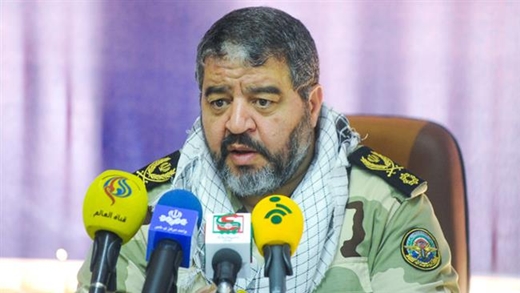 Brigadier General Gholamreza Jalali said it is against diplomatic norms to grant enemies access to the venues of negotiations for spying purposes.

A top Iranian military commander has advised the Iranian nuclear negotiators involved in talks with P5+1 to be watchful of potential attempts to spy on the talks.

Jalali said it is against diplomatic norms to grant enemies access to the venues of negotiations for spying purposes.

He advised Iranian officials involved in the negotiations at foreign venues not to use smartphones when trying to communicate classified information because of the high risks associated with the devices.

On Thursday, Swiss and Austrian officials said they had begun investigating reports that a computer virus targeted the hotels used by the delegates from Iran and P5+1.

The Wall Street Journal reported on Wednesday that spyware, widely believed to be used by Israel, had targeted the computer systems of the hotels hosting the sensitive negotiations.

Experts at Russia-based Cybersecurity Company Kaspersky were quoted by the Journal as saying that the firm had found at the sites traces of malware believed to be used by Israel. The company dubbed it Duqu Bet, and said it was an “improved version” of the Duqu virus, which had previously been used by the Israeli regime.

Negotiators from Iran and P5+1 – the five permanent members of the UN Security Council plus Germany – have held talks at Swiss hotels of Beau-Rivage Palace, Royal Plaza Montreux, Intercontinental and Hotel President Wilson as well as Palais Coburg in Vienna.

He pointed to the 2010-11 Stuxnet virus cyber-attacks on Iran’s nuclear energy facilities, saying that Iran is set to open a Cyber Defense Center in less than a month to defend itself against such attacks.