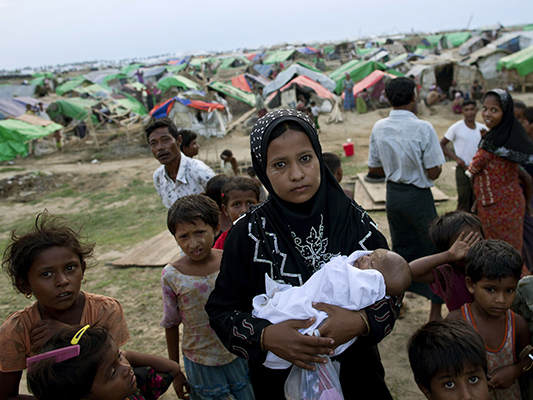 An Iranian lawmaker says the Islamic Republic can play an important role in uniting the Muslim world against the massacre of Rohingya Muslims in Myanmar through the Organization of Islamic Cooperation.

Jalil Rahimi Jahan-Abadi called on Islamic states to express their opposition to the mass killing of Muslims in Myanmar by the extremist Buddhists by lodging complaints with the Human Rights Council and the United Nations.

The lawmaker said the Islamic Republic of Iran should play a key role in putting an end to the crimes against Muslims in Myanmar, urging the foreign ministry to inform the world in the General Assembly of the United Nations about the massacre in Myanmar and help put an end to the crimes by lodging a complaint with the UN.

He also called on the foreign ministry to hold talks with Islamic states across the world to make a coalition against the massacre in Myanmar.

“Meanwhile, all Islamic and independent media should shed light on the Buddhists’ crimes against Rohingya Muslims,” he said in a Farsi interview with ICANA.

Rahimi Jahan-Abadi, who is also the head of the International Affairs Committee of the Iranian Parliament’s Judicial and Legal Commission, noted that Iran is not a member of International Criminal Court, so it cannot lodge a complaint.

“But we can brief the Human Rights Council as well as the United Nations Security Council on the crimes of Myanmar Buddhists against Muslims which are threatening the international peace and security,” he said.

The lawmaker stressed that the crimes committed by the Buddhists against the Myanmar Muslims stand in stark violation of international law including human rights and the principles of International Criminal Court.

He called on the UNSC to vehemently condemn the massacre underway by the Myanmar Buddhists against the Rohingya Muslims.

Rahimi Jahan-Abadi emphasized that the international community will have to pay a heavy price if it remains silent towards the massacre of Muslims in Myanmar and added the least price that the world has to pay is the creation of ISIS in Eastern Asia.

“The massacre of Muslims will pave the way for the extremist groups with ISIS ideology in the East Asia and this will inflict a heavy blow to the eastern hemisphere of the world,” he noted.