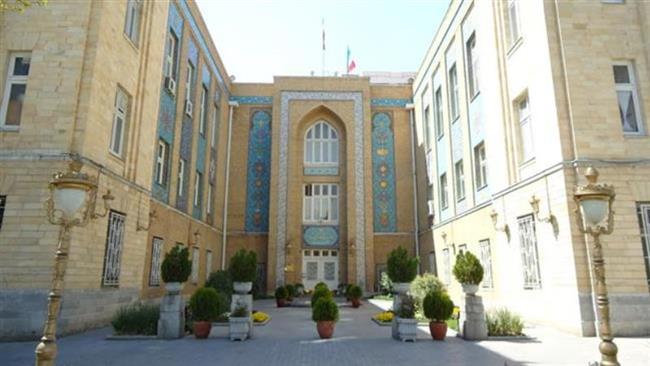 Saudi Arabia’s chargé d'affaires in Tehran was summoned after Saudi fighter jets prevented an Iranian plane, which was carrying medical aid, from entering the Yemeni airspace.

Iran’s Foreign Ministry has summoned Saudi Arabia’s chargé d’affaires in Tehran to express its protest over Riyadh’s interception of an Iranian aid flight to war-wracked Yemen.

Saudi Arabia’s most senior diplomat in Tehran was summoned on Friday after Saudi fighter jets prevented an Iranian plane, which was carrying medical aid, from entering the Yemeni airspace.

This is while the Iranian Red Crescent Society (IRCS) had obtained the necessary permission to fly in the Oman-Yemen route and send a plane in coordination with the International Committee of the Red Cross (ICRC) in order to fly Yemeni patients back to Iran and distribute medical aid to the injured in the impoverished Arab country, an Iranian Foreign Ministry official said.

He added that the Saudi fighter jets intercepted the Iranian plane and forced them to return to Iran.

The official described the move as a blatant interference in Yemen’s internal affairs and said the Islamic Republic would proceed with its efforts to help the Yemeni people and treat those wounded in the Saudi aggression against Yemen.

In another development, Iran’s Deputy Foreign Minister for Arab and African Affairs Hossein Amir Abdollahian has reprimanded Saudi Arabia for refusing to allow the delivery of humanitarian aid to the Yemeni people who sustained injuries during the kingdom’s airstrikes on its impoverished neighbor.

“Saudi Arabia does not help with efforts to deliver humanitarian aid and transfer of injured Yemenis for treatment,” Amir Abdollahian said in a telephone conversation with President of the International Committee of the Red Cross (ICRC) Peter Maurer on Friday.

The Iranian official called on the international community to take stronger action to dispatch humanitarian aid to Yemen, given the deteriorating human situation in the impoverished Arab country.

He added that Saudi Arabia has continued its military campaign against the country.

The senior Foreign Ministry official noted that two Iranian airplanes carrying humanitarian aid and medicine as well as the injured Yemenis, who have been treated in Iran, left for Yemen over the past two days after obtaining legal permission, but they were forced to turn back following Saudi Arabia’s “illegal interference.”

The official once again expressed the Islamic Republic’s readiness to cooperate with international organizations and send humanitarian aid and medicine to the “defenseless” Yemeni people.

Maurer, for his part, said the ICRC has made great efforts to deliver aid to the Yemeni people and held close consultations with Saudi Arabia after the announcement of the end of war in Yemen.

The ICRC president, however, added that the distribution of aid in Yemen requires the complete end of military operation in the crisis-hit country.

He noted that the ICRC is seeking a secure way to channel aid to Yemen and transfer the injured.

The phone conversation came after Saudi fighter jets intercepted an Iranian airplane with humanitarian aid to Yemen and prevented it from entering the Yemeni airspace.

Saudi Arabia launched its aerial campaign against Yemen on March 26 – without a United Nations mandate – in a bid to undermine the Houthi Ansarullah movement and to restore power to the country’s fugitive former president, Abd Rabbuh Mansur Hadi, a staunch ally of Riyadh.

On April 21, Riyadh announced the end of the first phase of its unlawful military operation, which claimed the lives of nearly 1,000 people in 27 days. However, airstrikes have continued with Saudi bombers targeting different areas across the country.

The Saudi aggression against Yemen has claimed the lives of more than 100 children over the past month, according to the United Nations Children’s Fund (UNICEF).