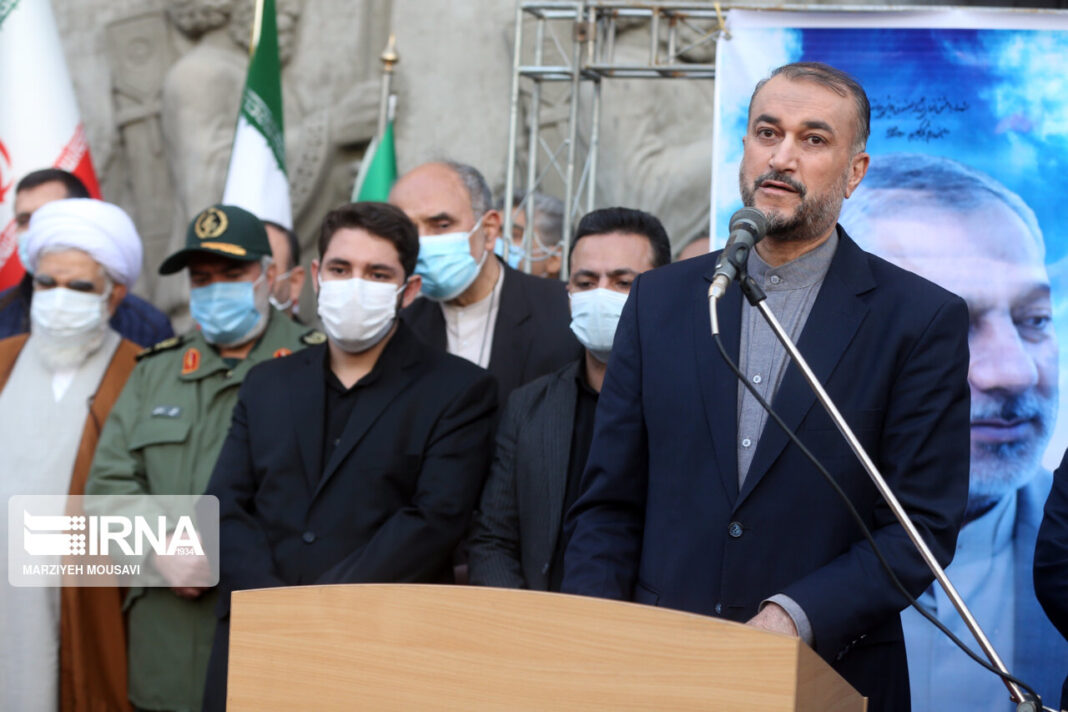 Some executive bodies in Riyadh are to blame for a delay in allowing Iran’s late ambassador to Yemen, who was suffering from coronavirus infection, to exit the Saudi-besieged country, Foreign Minister Hossein Amir-Abdollahian says. He added Tehran will lodge a formal protest over the procrastination in accordance with international law.

Iran’s Ambassador to Yemen Hassan Irloo passed away of COVID-19 complications on Tuesday. He had earlier this week been repatriated from Yemen amid a Saudi-led blockade of the war-torn Arab country to receive treatment at a hospital in Tehran.

Speaking to reporters on the sidelines of the ambassador’s funeral procession in Tehran on Tuesday, Amir-Abdollahian said prior to Irloo’s death, the Foreign Ministry had been trying for several days to obtain a permission from Riyadh via a third country to send a plane either from Iran or another state to Sana’a to bring the coronavirus-stricken diplomat home and immediately transfer him to a hospital in Tehran for treatment.

“However, the Saudi side was unfortunately very late in making a decision in this regard and some executive bodies of Saudi Arabia dragged their feet,” he added.

“We will formally lodge a protest in accordance with international conventions, and at the same time, we hope that Yemen will be able to get out of this war and severe humanitarian siege as soon as possible through a political solution,” the top Iranian diplomat continued.

He once again reiterated Iran’s stance on the need to solve the ongoing crisis through political channels, saying Tehran believes all Yemenis should play a role in determining their country’s future.

The chief diplomat condemned the military campaign that the Saudi regime and its allies have been waging on Yemen since early 2015.

“The experience of six years of war showed that the aggressors cannot achieve any victory through military means. Yemen must be left to the Yemenis themselves so that the problems will be solved through the intra-Yemeni talks,” he stated.

During his two-year mission in Sana’a, the Iranian ambassador made efforts to help find a political solution to the Yemen conflict, end the war in the impoverished country and restore stability, security and peace to it, Amir-Abdollahian noted.

Saeed Khatibzadeh, spokesman for Iran’s Foreign Ministry, said Irloo was transferred to the country in a “bad state” and due to the “late cooperation” of some countries, a reference to Saudi Arabia.

A war veteran, Irloo had sustained injuries from chemical warfare attacks on Iran during Iraq’s 1980-88 imposed war, backed by the West.

He contracted the coronavirus at the place of his mission and passed away early on Tuesday “despite undergoing all stages of treatment to improve his condition”, Khatibzadeh added.

Irloo officially began his diplomatic mission to Yemen in November 2020, in defiance of the US opposition to close ties between Tehran and Sana’a.

In December 2020, he was sanctioned by the former US president Donald Trump for his links to the Islamic Revolution Guard Corps (IRGC)’s Quds Force.

Saudi Arabia, backed by the US and regional allies, launched the war on Yemen in March 2015, with the aim of reinstalling the unpopular regime of Yemen’s former president Abd Rabbuh Mansur Hadi and to crush the popular Ansarullah movement.

The Saudi war has left hundreds of thousands of Yemenis dead, and displaced millions more. It has also destroyed Yemen’s infrastructure and spread famine and infectious diseases in the Arab country.

Despite Saudi Arabia’s relentless bombardment of the impoverished country, Yemeni armed forces and the allied popular committees have grown in strength against the Saudi-led invaders.