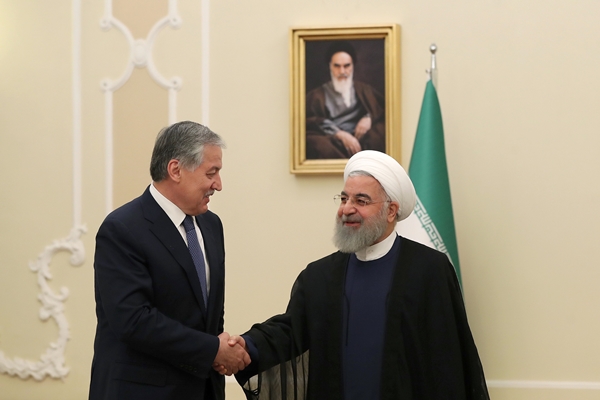 Iranian President Hassan Rouhani says the Islamic Republic can be the safest and best transit route for goods imported to and exported from the Republic of Tajikistan.

The Iranian president made the comments during his Saturday meeting with Tajik Foreign Minister Sirodjidin Muhriddin who is in Tehran on an official visit.

Rouhani further noted that Iran and Tajikistan have a great deal of cultural, historical, literary, religious, and linguistic commonalities.

“Tehran and Dushanbe must strive to expand relations in different sectors which are in the interests of the two nations and extend friendships,” he added.

The Islamic Republic of Iran is constantly calling for stability, full security, advancement and progress of Tajikistan, Rouhani said, calling for the strengthening of relations and boosting of cooperation between the two sides.

“We are ready to contribute to the implementation of Tajikistan’s projects by providing technical and engineering services and transferring experiences.

This is an honour for the companies and the private sector of Iran to provide the best services to friendly countries.”

The president said that today the region is in a special condition and faces terrorism and foreign intervention.

“Today, while terrorists have left Iraq and Syria, there are concerns that they want to be active in the Central Asia and the Caucasus. Therefore, Iran and Tajikistan can further expand their cooperation in the fight against terrorism.”

For his part, Muhriddin emphasised that Tajikistan and Iran have always been friends and brothers in the two countries and that they will move forward in the future to develop friendships and fraternities.

He also stressed that “the development of relations and cooperation between Tehran – Dushanbe is very important.”

Muhriddin emphasised that it is a must to expand bilateral economic and trade relations and cooperation, asking Iran to let Tajikistan benefit from the advantages of Chabahar port and developing cooperation in the transit sector and using the experience of Iranian companies and specialists in providing technical and engineering services, especially in the areas of energy and infrastructural issues in this country.

“We believe that the existence of terrorist groups is very dangerous for the people of the region, and we must therefore all work together on the path to fight terrorism,” he said, adding that the policy of combating terrorism and extremism in the region has had a lot of positive effects.

The Tajik foreign minister said the Tajik government is willing to boost ties with Iran saying that the Tajik President has officially invited President Hassan Rouhani and expressed hope that the Islamic Republic of Iran will attend the CICA Summit which will be held soon in Dushanbe.

Muhriddin, who arrived in Tehran on Friday, earlier met with his Iranian counterpart Mohammad Javad Zarif and exchanged views about expanding political, parliamentary, consular, economic, transport, and cultural cooperation, as well as the fight against extremism and terrorism.

With a shared language and cultural links, Iran and Tajikistan enjoyed a close relationship following Tajikistan’s independence in 1991.

Iran was the first country to establish an embassy in Dushanbe, the Tajik capital, in January 1992, and hosted peace talks that helped to end the civil war in Tajikistan in 1997.

Following the war, Iran invested in Tajikistan, building a tunnel at Anzob in 2006 and the Sangtuda‑2 hydroelectric plant in 2011. By 2014, bilateral trade had reached US$228m, making Iran Tajikistan’s fifth-largest trading partner.

In December 2015 relations worsened after the Islamic Republic invited a Tajikistani opposition leader, Muhiddin Kabiri, to a conference in Tehran.

In September 2015 Tajikistan’s justice ministry classified the Islamic Renaissance Party of Tajikistan (IRPT), which Kabiri leads, as a terrorist organisation. In an official protest, the Tajik government accused Iran of being a “supporter of terrorism” and Tajikistan’s state media published a series of articles criticising the country.

In April, Tajikistan blocked Iranian meat and tea imports. Officials could not agree as to why this was done. Although some stated it was because of the poor quality of the products, others argued it resulted from labels not being written in the Tajik language.

The suspension of the Imam Khomeini Relief Foundation’s activities, and shutting Iran’s Cultural Attache’s office in Dushanbe, Iran’s Red Crescent Society and IRIB Bureau and many other issues are the latest in this series of moves against Iranian activities in Tajikistan.