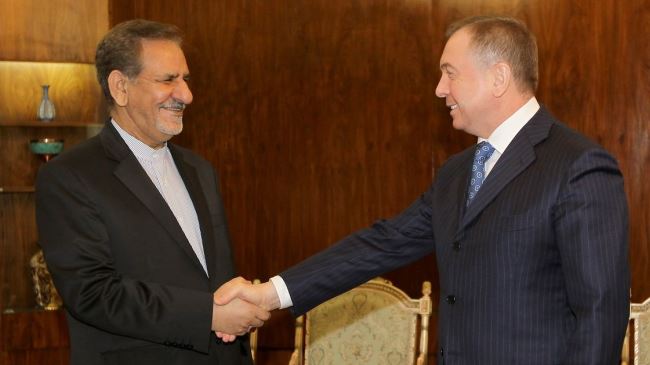 Tehran and Minsk enjoy growing relations in the political and economic sectors, but both sides must take more serious steps to further strengthen their economic ties, said Jahangiri.

“Sanctions can never prevent a country from achieving its goals,” Jahangiri said in a meeting with Belarusian Minister of Foreign Affairs Vladimir Makei in Tehran on Sunday.

He added that Tehran and Minsk enjoy growing relations in the political and economic sectors, but both sides must take more serious steps to further strengthen their economic ties.

The Iranian vice president said Tehran and Minsk should support each other in the international arena.

Jahangiri emphasized that the two countries have vast potential for improving economic cooperation, adding that the private sectors can help both sides reach this goal.

The Belarusian minister, for his part, said his country would never cut relations with friendly countries over Western pressure and influence.

Makei added that Minsk is ready to boost its ties with Tehran in every field, stressing that the two sides should mainly focus on the expansion of economic cooperation.