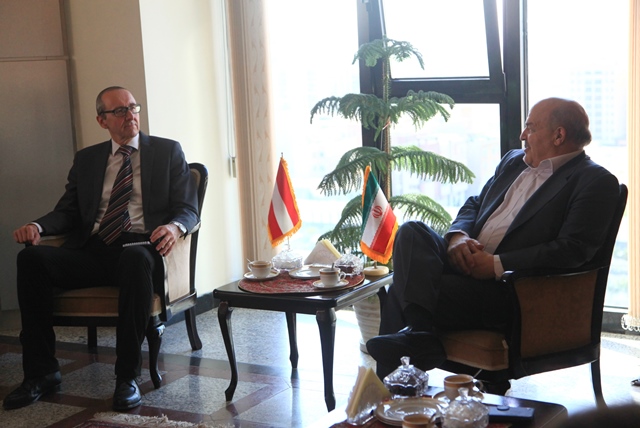 Head of the Iranian Department of the Environment Issa Kalantari and Austrian Ambassador to Tehran Stefan Scholz have sat down for talks to exchange views on joint cooperation on environmental issues.

“In Third World countries, sustainable development runs into problems due to governments’ short-term interests. Sanctions have also created numerous problems for Iran’s environment, which have led to unsustainable utilization of the country’s resources over the past 50 years,” said the Iranian official in the meeting.

“Using up almost the entire underground water and meadows for agriculture and grazing cattle has resulted in many problems for wildlife and the environment in Iran,” Kalantari added.

“We believed that Europe is independent from the United States and enjoys independence of its own, but it was proven that Europe reached a dead end, too, after the US withdrawal from the nuclear deal,” he said.

“It is regrettable that the environment is paying the price for the sanctions [imposed on Iran],” said Kalantari.

“These sanctions will destroy the earth, though people’s awareness has increased a lot and the policies of the Cold War era are no effective any longer,” he said/

Kalantari called on the top Austrian diplomat to have effective collaboration with Iran in the field of energy as well as protecting the flora and fauna. He also said Iran would like to draw on Austria’s experience in that regard.

Scholz, in turn, expressed pleasure over the meeting. He said three Iran-Austria joint cooperation groups working in the fields of water, the environment and tourism will meet in Tehran next week

He added a symposium will also be held with Austria’s deputy minister of energy and the environment in attendance.

He also touched upon certain parties’ non-compliance with the JCPOA. He said he knew that Iran was disappointed with their failure to live up to their commitments. However, he added, Austria is proud of having hosted meetings on the JCPOA and has spent a lot on organizing those events. Moreover, he said, the JCPOA has formed a network of low-level cooperation.

The Austrian ambassador said there are 40 lakes in his country where it would be impossible to even swim four decades ago. Nevertheless, he added, now they contain high-quality potable water. He said Austria drew on technology and regulations to secure that accomplishment and is ready to share that achievement with Iran.