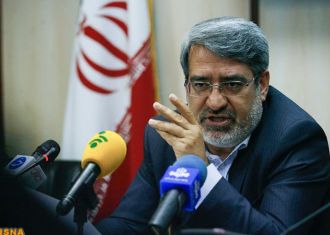 Iranian Interior Minister Abdolreza Rahmani Fazli held a meeting with Mir Jan Muhammad Jamali, the speaker of the assembly of the Pakistani province of Balochistan, in Tehran on Sunday.

Fazli told Jamali that Pakistan should control illegal movements in the areas on the border with Iran.

The Iranian interior minister said the Islamic Republic of Iran is duty-bound to defend and control its borders and will not let anyone enter the country through the borders of the Iranian province of Sistan-Baluchistan.

The Pakistani government is expected to crack down on illegal movements in the area of the border with Iran, and Iran is ready to cooperate in this matter, he stated.

Fazli also expressed hope that Islamabad would cooperate in the campaign against illegal drug trafficking and in controlling border areas.

The two countries must increase their cooperation, and a Tehran-Islamabad security agreement should be signed, he said.

In addition, the two countries should make efforts to prevent foreign interventions through enhancing their cooperation, he stated.

Jamali said Iranian and Pakistani officials should hold more meetings and should establish a permanent commission for gathering information for decision making and purposeful action.

He added that increasing business and commerce in border areas is essential for improving the situation in the region.

Fazli also stated that the Iran-Pakistan joint commercial commission should become more active, adding that the commission will hold a meeting sometime in the next two months.

Five Iranian border guards were abducted in the southeastern Iranian province of Sistan-Baluchestan on February 6 and were transferred to Pakistan. Later, the terrorist group Jaish-ul-Adl posted photos of the five men on twitter and claimed responsibility for the abduction.

On Saturday, the Fars News Agency wrongly reported that the five men had been freed.