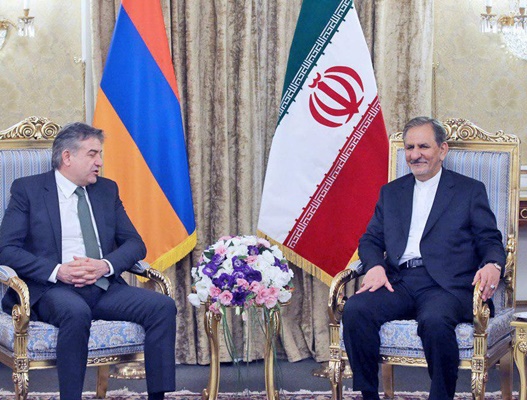 In a ceremony attended by Armenian Prime Minister Karen Karapetyan and Iranian First Vice-President Es’haq Jahangiri in Tehran, the two countries inked a number of agreements on various fields.

The Memorandums of Understanding (MoUs) were signed on veterinary, culture and art, and science and technology, according to a Farsi report by IRNA.

Karapetyan arrived in Tehran earlier on Monday, and was officially welcomed by Jahangiri in Saadabad Palace. The Armenian PM is on a two-day visit aimed at expansion of bilateral ties between Tehran and Yerevan.

In an interview on August 1, Karapetyan described Iran-Armenia relations as “exemplary and unique”, adding, “The friendship between the two neighbours is so firm that it is just necessary to further develop and deepen them by maintaining the commonalities uniting us for centuries. This is the reliable base and stronghold of our relations.”