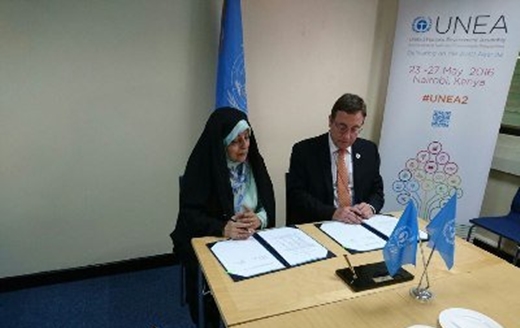 The two officials signed the document on the sidelines of the second United Nations Environment Assembly (UNEA-2), held on May 23-27 in Kenya.

Hazardous waste management and promoting collaborative researches are of the main subjects of the plan. Other topics in this document include holding regional workshops, easing information exchange, and conducting joint research on e-waste.

In addition to the signing of the agreement, Ebtekar followed up plans on combating sand and dust storms haunting many cities in Iran and the whole region at UNEA-2.

In a meeting with Shamshad Akhtar, the Executive Secretary for the UN Economic and Social Commission for Asia and the Pacific (ESCAP), Ebtekar regretted the fact that regional conflicts in the Middle East have created a barrier to international cooperation in resolving dust storms.

“These conflicts have minimized cooperation, or in some cases made it impossible,” she said.

Thanking Akhtar for ESCAP’s adoption of the resolution on combating sand and dust storms submitted by Iran, she emphasized the importance of regional cooperation in solving the matter.

“Soil erosion, deforestation, land degradation, drying lakes and lagoons and climate change are some of the issues affecting dust storms,” she said. “We have come up with a scientifically justified and practical plan to fight dust particles.”

In response to Akhtar’s suggestion, Ebtekar said that the conference can be held concurrent with ESCAP’s sub-regional office opening in Iran in September 2016.

According to the DoE website, a meeting with Iranian and Mongolian experts, and also specialists from the University of Oxford, was held on Thursday, as part of the activities being taken to stop dust storms.

UNEP to Establish an Office in Iran

Over a meeting with Erik Solheim, the executive director of the United Nations Environment Program (UNEP), Ebtekar asked for the establishment of a UNEP office in Iran.

Solheim expressed his readiness to cooperate with Iran and made a pledge to follow through with the establishment of a sub-regional office in Iran.