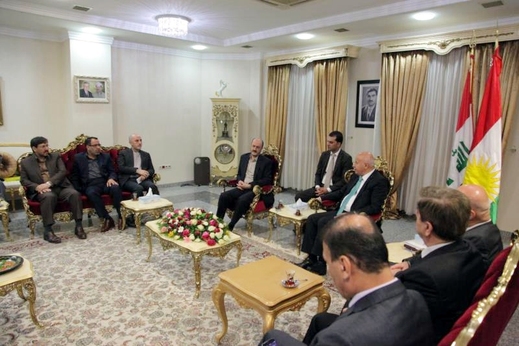 In a meeting in Erbil, Governor-General of Iran’s Kordestan Province Abdol-Mohammad Zahedi and Abdelkarim Sinjari, the Interior Minister of the Iraqi Kurdistan Region, explored the avenues for promoting mutual cooperation between the two neighbouring sides.

Here’s IFP’s translation of a report by Kurdpress.

During the meeting held in the Kurdish capital on Thursday, Zahedi highlighted the importance of mutual cooperation in security fields, stressing that Iran considers the security of Kurdistan as its own.

“The Islamic Republic of Iran will remain a supporter of oppressed regional nations, especially the people of Kurdistan region, as it has always been,” he noted, referring to the threats of ISIS (also known as ISIL or Daesh) terrorist group.

He also pointed to the commercial ties between the two sides, and urged the swift development of bilateral relations given the existing capacities.

Sinjari, for his part, underlined that the Kurdistan Regional Government (KRG) is willing to further deepen its highly important cooperation with Iran.

“The relations of the Iraqi Kurdistan region with the Islamic Republic of Iran are of strategic importance; we are trying to broaden them,” Sinjari said.

He reiterated that the people of the Iraqi Kurdistan region will always remember Iran’s assistance during the difficult times.

In April, KRG Prime Minister Nechirvan Barzani praised the Iranian government and nation for assisting the Kurdish civilians to overcome ISIS threats and other security crises in Iraq.

“Iran has played a very positive role during the ISIS attack on Iraq’s Kurdistan region,” Barzani said in a meeting with Iranian Ambassador to Baghdad Hassan Danayee Far in Erbil.

The Iranian governor arrived in the Kurdish region on Wednesday at the head of a delegation. The visit is aimed at boosting bilateral ties, particularly in trade and security.