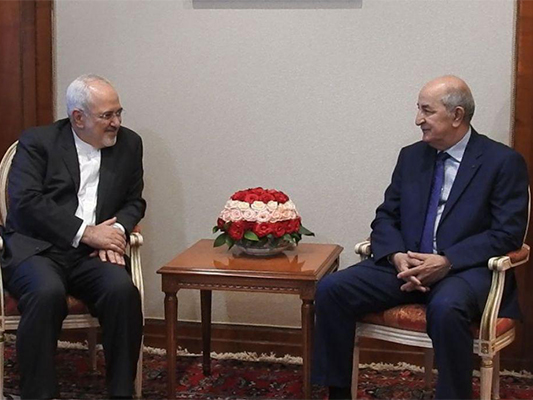 Iranian foreign minister and Algerian prime minister in a meeting in Algiers voiced their countries’ preparedness for expansion of mutual cooperation in different fields.

“Iran and Algeria have common grounds on many regional and international issues. The two sides have always been exchanging views on different issues. Meanwhile, there is no limit to our potential cooperation in various fields including banking, automotive industry and housing, Zarif noted.

The Islamic Republic of Iran is ready to remove any obstacles in the way of bilateral ties with Algiers, Iran’s top diplomat went on to say.

For his part, Algerian prime minister praised the close relations between Iran and Algeria and expressed the hope that the two sides could expand their economic ties in tandem with their political relations.

“We are ready to expand ties with the Islamic Republic of Iran in various fields, particularly in economy,” he said, adding there is an appropriate ground for further cooperation between the two sides.

He touched on the latest regional development in the Persian Gulf and said Algeria had always sought to establish good relations with the regional states.

“There are some backward and troublesome hubs in the Arab world which are seeking to spoil these ties,” he noted.

“Islam is a key factor strengthening unity among regional states. We all enjoy common interests in the region. So, we can overcome our differences through talks and moderation,” he concluded.