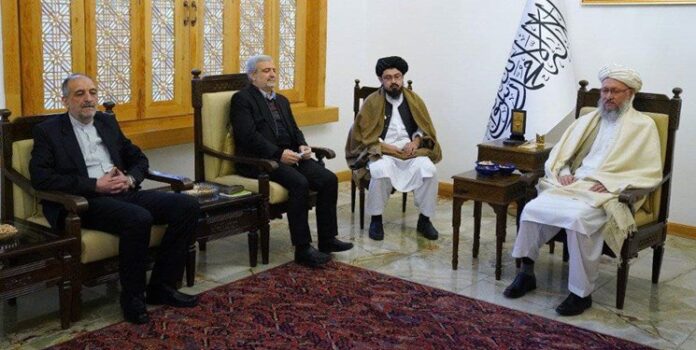 Iran and Afghanistan have exchanged views on the enhancement of mutual relations, including ways to boost security cooperation.

The topics were discussed in a meeting between Hassan Kazemi Qomi, the Iranian president’s pointman on Afghanistan, and Afghan Deputy Prime Minister Abdul Salam Hanafi.

Other issues on the agenda of the talks were also the expansion of economic, scientific and cultural cooperation.

The top Iranian envoy also met with members of the Shia Ulema (scholars) Council of Afghanistan where the two sides discussed cultural issues, affairs pertaining to Afghan immigrants residing in Iran and Tehran’s cooperation with Afghans.

Representatives of Iran and the Taliban put forward their programs for the promotion of mutual ties in five committees on economy, fuel, water and electricity, foreign nationals and culture.

The busiest committee was the one related to economy, trade and investment where acting economy and agriculture minister of the Taliban was present.

Among the topics discussed in the committees were border security, fighting human and drug trafficking, the establishment of smart systems which would give warning in cases of flooding and electricity development plans for Afghanistan.

Iran’s representative arrived in Kabul on November 15 for a three-day trip.

“Some countries seek to wage proxy wars in Afghanistan under the pretext of fighting terrorism,” he had said at the beginning of his trip.

As for Iran’s recognition of the Taliban government, he said, “Iran respects Afghan people’s demands.”