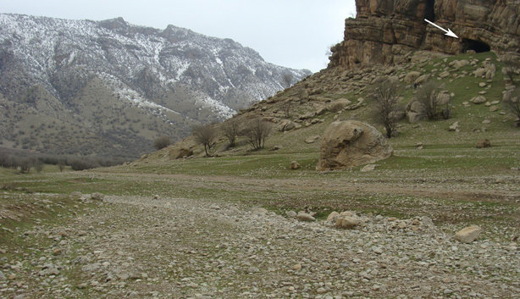 The key objective of the 5-year archeological project in Kaldar Cave is to develop an understanding of the global position of this region in Paleolithic studies.

On December 10, www.richt.ir, the website of the Research Center of Iran’s Cultural Heritage, Handicrafts and Tourism Organization reported that an archeological project centering on the origin of modern humans has just gotten underway in Lorestan Province in cooperation with international experts. What appears below is the translation of the report the website posted:

On December 10, 2014, a team of international experts launched archeological excavations at Kaldar Cave in Khorramabad Valley in Lorestan to document the emergence of first modern humans in Iran and shed light on why the Neanderthals went extinct.

“There are different theories as to where modern humans in Europe have originated from. One such theory points at Iran as a likely place for the origination of modern humans. The current excavation has a multidisciplinary nature and includes advanced analysis of stone tools and what remains of flora and fauna,” said the head of the archeological team Behrooz Bazgir.

Reiterating that such excavations are part of a bigger research project, he said, “During the project, archeological sites which could help us broaden our knowledge about the Paleolithic era will be studied.”

“The major objective of this massive project is to learn about the global position of this region in Paleolithic studies. Over the past few decades, there have been significant findings involving preliminary evidence about human settlement in West Asia which has shed further light on the developments of Stone Age in neighboring countries. That in turn has highlighted Iran’s position as a bridge connecting Asia to Africa and Europe,”

The 5-year archeological excavation project at Kaldar Cave is based on a memorandum of understanding (MoU) signed between Director of the Research Center of Iran’s Cultural Heritage, Handicrafts and Tourism Organization Seyyed Mohammad Beheshti and Director of the Catalan Institute of Human Paleoecology and Social Evolution Professor Eudald Carbonell.