In an in-depth interview Rafsanjani talks politics, past and present (PART Three) 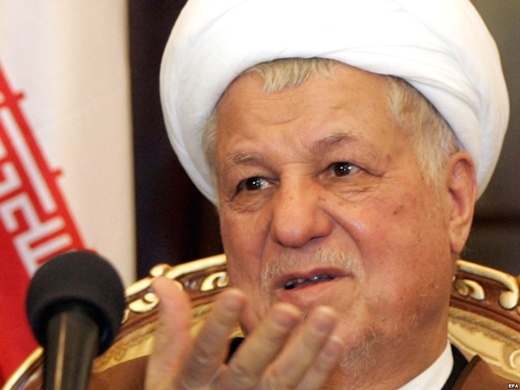 The Expediency Council chairman says that a tough year lies ahead for Iran if nuclear talks break down and sanctions remain in place.

The following is part three of the translation of an exclusive interview Arman-e Emrooz daily’s Hossein Abdollahi conducted with the top councilor. The interview was published by the newspaper on March 15.

[What is your take on government’s ability to honor its promises?]

[…] Promises are made when officials take the podium; they say they keep their promises. In the long run, it is not good for the reputation of the government to say that it has not forgotten its promises, but fail in practice to make good on them.

[…] The problem is that when Mr. Rouhani was making promises he didn’t make them conditional, saying he would do this and that. He knew the government does not have at its disposal the tools it needs to get these jobs done.

What has Mr. Rouhani taken over [as the head of the government]? He has nothing at hand except the executive branch whose budget should be passed in a parliament that has its own issues; in other words, the government should obey [orders] when it comes to budget and is not the decision maker. The government can just implement the budget bill, its hands are tied.

The government is empty-handed when it comes to advertising; it’s unclear what is being done in that area. The performance of state media is rather vague, one cannot say if they are defending or criticizing the government! […] When it comes to IRIB, the issue is clear.

The Judiciary Branch is taking its own path. The Army steers clear of political issues. The government airs grievances more than others. It has expectations that remain unmet.

In all, a government has come to power which can only implement the orders. It cannot make or get involved in decisions. It can only make decisions in certain areas in which it faces nuisances. For instance, in state-run universities, the government can make good on part of its promises, something Mr. Rouhani has gone to great lengths to do. But any minister he proposed to parliament met with [the chamber’s] opposition.

The Ministry of Culture and Islamic Guidance belongs to the government, but there are some across the nation who claim they are engaged in guidance; [it seems] everyone has their own ministry of [Islamic] guidance, acting as they wish. Truly, the government’s hands are tied.

When the government praises and supports the [nuclear] negotiators who are involved in the talks with which the Supreme Leader is satisfied, you see what they do. In security issues, some are trying to create problems for people.

If people accepted the fact that the government wanted to keep its promises but it lacked the needed tools, such complaints would not arise. The government is trying to seriously pursue the [country’s] affairs, but the performance of those in the government is far from perfect. Generally, the promises the government has made are not practically implementable now. Next [Iranian] year will be a tough year [for the country] if sanctions remain in place, unless talks result in a deal.

Does Mr. Rouhani consult with you about certain key issues which have injected a sense of hopelessness and dismay into society? Ever since you have entered the scene for the elections, a sense of hope has been instilled in society and people say this government has close ties with you. […] All eyes are on you. Does Mr. Rouhani seek your counseling for solving the problems? […]

We are friends. I see him whenever I think it’s necessary. If I tell him that I want to have a word with him, either he comes to my office or I go to him. His ministers sometimes come to me and discuss the problems. Up to now Mr. Rouhani has not asked for talks, I have always stepped forward because I think it’s my duty to do something.

People may think that I have helped this government rise to power. I don’t want to see Mr. Rouhani say he has come to office with the help of others, he said it at the beginning though. I don’t want to hear people say this is my government. From the very beginning I told him, ‘My relatives should not hold posts in your government to avoid such speculations. I don’t propose anybody for ministries. You know the people I know. For the sake of consultation, I am quite ready to help.’

It was what we agreed on from the start. I know Mr. Rouhani has not retracted what he believed in and is willing to settle such issues, but there are problems. He was not allowed to act freely as far as the Cabinet lineup was concerned. He faced a parliament in which certain MPs were determined not to cooperate with the government in several areas. You can see that these problems persist.

Parliamentary elections are to be held next year. Are you going to support any special group or ticket?

I will only get engaged in election debates. It has been always the case and I will do it again. It is what I do because it is my responsibility and I won’t do it for special people. I will run for the Assembly of Experts because it has something to do with clerics; we all have to get involved.

Now we have an asset which should be protected. The Leader knowingly raised the question of people’s right. What we do about general policies in the [Expediency] Council is to honor people’s right. […]

Certain issues are passed in the council and some issues are voted down. We work freely in a democratic way in the council. I think what we pass there paves the way to some extent, especially because we should monitor the implementation of what we have passed.

All in all, I hope the next parliamentary elections can be held more easily than other elections. People should be vigilant. They should turn out to reclaim their rights and should not be disappointed. When sanctions are lifted, people will be more delighted and will participate [in the elections]. I am not disappointed because the young generation that is to replace the past generations will claim its own rights one day. They will not let the situation worsen.

Problems arising in the development process will be removed if issues between Iran and the US are settled and ties are reestablished. A onetime taboo has been somewhat shattered. As a case in point, we can mention the walk Mr. Zarif took with Mr. John Kerry [on the sidelines of nuclear talks in Geneva]. For years, you have said that issues between Iran and the US should be settled. It was one of the many issues you had asked the late Imam to agree to. You had asked Imam to settle the issue in his lifetime. Do you think that the stage is being set for a thaw in Iran-US ties?

Obama has apparently taken a positive attitude, standing up to Congress, although it is not easy for him to face up to the Israelis. The influence of Israelis is significant in the US [Congress]. The Jews and their friends are the main lobbyists there, but Obama is determined. His stance is clear. He says that they [the Americans] have an issue with Iran over its nuclear program and that it should be dealt with in a way that gives the US at least one year to prevent Iran if it ever decides to develop nuclear arms.

In case there is no bad intention, I think, this stance is acceptable by Iran because we do not possess atomic weaponry. We can accept the supervision [they have asked for] and have control over everything. […] Iran has no plan to go after nuclear weapons.

I think it [such an agreement] is viable and I believe the Americans are willing. It’s no secret that Republicans want to see the [Obama] administration fail in its efforts and want to get concessions from Iran through bullying. There is much hope that the issue is settled in this government. If Obama gets this job done, the stage will be set for the two sides to work together.

When was the last time you met the Supreme Leader?

One or two weeks ago!

What did come up for discussion?

The meeting focused on the nuclear issue. In the meeting, I asked the leader not to go tough on the issue, saying that the time is not ripe for tough attitudes. The leader replied, ‘Mr. Rouhani was here yesterday. He was satisfied when he was leaving the place’.

Is your relationship with the Supreme Leader like before?

It cannot be like it was in the past. Back then I held an executive position and we could talk, via phone or face time, about the country’s daily issues. It is not the case now. We do our job in the council and what we decided should be approved by the leader. But the emotional ties are still in place. Once in a month, we sit together talking about issues related to seminary schools.