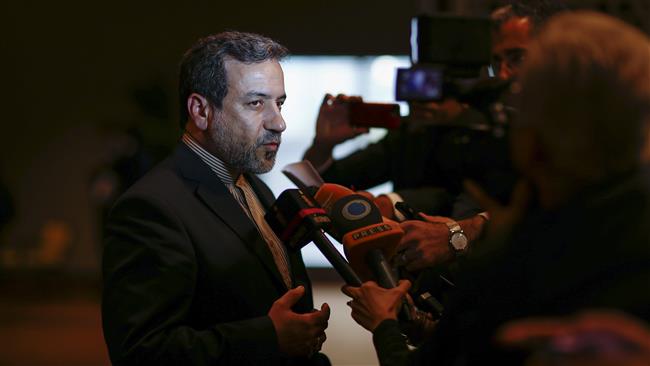 Iran believes that based on the IAEA final assessment, the Board of Governors should close the so-called PMD issue and pave the way for a new era of cooperation between Iran and the agency, says the Iranian deputy foreign minister.

A senior Iranian official says the UN nuclear agency must close the case of the so-called possible military dimensions (PMD) of Tehran’s nuclear program for Iran to implement a nuclear agreement with 5+1.

Iran’s Deputy Foreign Minister for Legal and International Affairs Abbas Araghchi told reporters that during a meeting of the joint commission between Iran and P5+1 in Vienna, Austria, on Monday, the sides reviewed issues pertaining to the implementation of the nuclear agreement, dubbed the Joint Comprehensive Plan of Action (JCPOA), before the implementation day.

“One of the major issues was a resolution which the [IAEA] Board of Governors should adopt and conclude the consideration of the so-called PMD issue. That was a major issue,” Araghchi said.

He added that representatives of Iran and P5+1 held “very good consultation” about the issue “in a positive atmosphere.”

The Iranian negotiator also strongly rejected some points in the latest IAEA report related to what it calls the development of a nuclear explosive device in the country’s nuclear activities before 2003.

However, the same IAEA assessment verified that these activities were not going beyond some studies and that Iran’s nuclear material had had no diversion, Araghchi pointed out.

He said Iran believes that the recent IAEA assessment by the agency’s Director General Yukiya Amano was “a strong document proving the peaceful nature of Iran’s nuclear program in the past 10 years.”

“We believe that based on this final assessment, the Board of Governors should close the so-called PMD issue and pave the way for a new era of cooperation between Iran and the agency” the Iranian official added.

In its latest report on Wednesday, the UN nuclear monitoring body said it has found no indications of the diversion of nuclear material for non-civilian objectives in Iran’s nuclear program.

The report also alleged that activities related to the development of a nuclear explosive device in Iran’s nuclear program “did not advance beyond feasibility and scientific studies, and the acquisition of certain relevant technical competences and capabilities.”

The IAEA’s Board of Governors is set to hold a meeting on December 15 to make a final decision on Iran’s nuclear case. Tehran says it will implement a nuclear agreement signed with six world powers in July once the file is completely closed.

Iran and P5+1managed to finalize the text of the JCPOA in the Austrian capital, Vienna, on July 14.