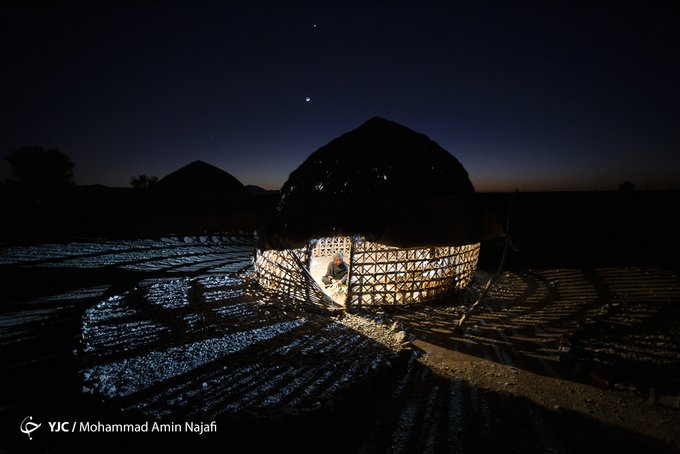 The first hut hotel of Iran which opened in the underprivileged city of Ghalehganj in 2016, is now a symbol of the development of city, and it is now known for this hotel.

Ghalehganj is a city and capital of Ghalehganj County in Kerman Province, south of Iran. The city, which is known for its hut hotels, belongs to the pre-Islamic era. Ancient remains unearthed indicate the city is over 5,000 years old.

Now people who live in this city include Persians, Baluch, Arabs and Bashagerdi people.

People here live in poverty, but their life has many beauties. Wicker and the Kapari huts made of wicker in Ghalehganj are an integral part of the lives of people who live here. They are people who prepare the huts with empty hands.

The inhabitants of Ghalehganj do not have a workshop or factory. Each hut is itself a workshop. It is both the place of residence and workplace.

The Mazari palm plant is the raw material of the work of more than a thousand men and women.

An official says Ghalehganj was a vast area that everyone who wanted to enter, would have no access to basic facilities like accommodation. While there were different visitors, they always crossed the region and did not stay in the area. One of the indicators of deprivation is the lack of accommodation centres. When the hotel was built, it was in fact the first hotel to be built with local materials and the same standards of a hotel. Unlike modern buildings, these structures have no environmental pollution and are based on environment-friendly tourism industry.

The huts have always been a symbol of grief and poverty for these people. However, they have changed their minds and are now proud of having such huts. Residents of Ghalehganj saw that people from different cities came and stayed in the huts they had built for years.

The following photo collection tells the story of hidden treasures of this land and takes you to the huts that their owners have found are the most valuable treasure in the world.