House arrest is in line with the law: Official 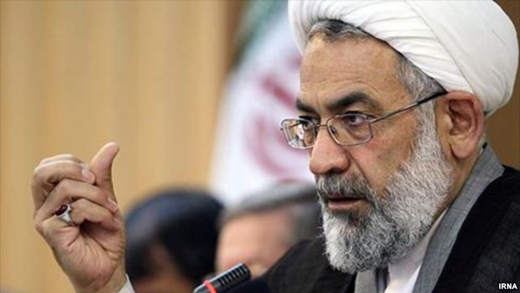 Those who question the house arrest are the ones who either have not read the law or do not understand it, said the head of the Administrative Justice Court.

The controversial speech of Ali Motahari, a Tehran MP, which was interrupted on parliament floor and sparked a commotion in the Islamic Consultative Assembly is still pretty much in the news, drawing reactions from different officials. On January 13 Arman-e Emrooz reported the comments of the Head of Iran’s Administrative Justice Court Mohammad Jafar Montazeri on the heated dispute in the chamber. The following is a partial translation of the report:

“It is not right to ignore national interests, and turn down the logical decisions of senior state officials and use them to provoke disagreement,” said Montazeri at an Administrative Justice Court meeting on January 12.

Denouncing the recent shoving match in parliament as shameful, he underscored the need for unity between different factions of the Islamic Revolution.

“That there is disagreement between individuals and MPs is good and acceptable, because a difference in ideas could help the country grow. However, jumping down each other’s throats does not represent a clash of ideas,” he stated.

He went on to say, “We need to be a role model and start fostering unity among ourselves; we should avoid eliminating others [who are opposed to us]. We need to follow Supreme Leader’s guidelines on unity.”

“Using the decision of the establishment to put under house arrest those behind unrest in the aftermath of the 2009 presidential elections as a pretext to spark division runs counter to the country’s expedience. Such a decision is legally defensible, because it has been made by the Supreme National Security Council and unfortunately, those who either have not read the law or do not understand it make wrong comments about it,” he further said.

“Article 176 of the Constitution says ‘In order to safeguarding the national interests and preserving the Islamic Revolution, the territorial integrity and national sovereignty, a Supreme Council for National Security presided over by the President shall be constituted to fulfill the following responsibilities: 1. Determining the defense and national security policies within the framework of general policies determined by the Leader. […]. The article also says that the decisions of the Supreme National Security Council shall be effective after the confirmation by the Leader.’

“On security grounds, the Supreme National Council has made a decision that some individuals should be under house arrest for a while. In other words, the council decided that it would not be in the country’s interest to bring them to court. The decision has been taken by a body with a legal position [which has the right] to make security polices for the country,” Montazeri reiterated.

“Anyway, it’s a legally sound decision by the Supreme National Council which cannot be questioned. We all need to join hands to cherish the current secure atmosphere and use this blessing in order to address the issues that the country is faced with,” he stressed.