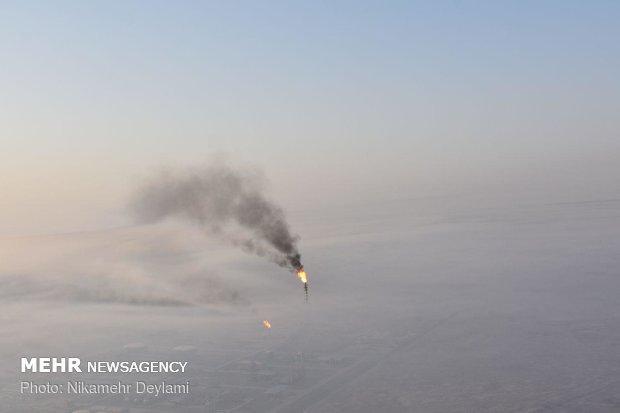 The wildfires that had been mostly contained in the Iraqi part of Hoor-al-Azim Wetland have once again swept through the region and the smoke has affected the cities of Iran’s Khuzestan province.

Kiomars Hajizadeh, the Director General of Khuzestan Crisis Management Department, says a huge part of the fire in the Hoor-al-Azim wetland occurred in Iraq, which is likely to be deliberate.

“Unfortunately, the situation in Iraq has made the situation difficult to deal with. This country must make special efforts to resolve this issue,” he stressed.

So far many measures have been taken to prevent fires in the wetland, but since the source of fires is not in Iran, the operations have become very difficult to carry out, he added.

The fire engulfed a region that has not undergone any clearing operations after the war imposed by Iraq, he noted.

Hajizadeh said the problem of smoke diffusion in the cities of Khuzestan province has turned into a serious one, saying that the most appropriate solution for this problem is the release of water from the Karkheh River.

“And that’s why in the early days of the incident, a committee was set up to release water,” he noted.

“Khuzestan’s water and power departments need to do some investigations to determine whether the water, which is to be transferred to Iraq, can be provided from the Karkheh River,” underlined Hajizadeh.

Khuzestan crisis management department is set to send aircraft to contain and extinguish the fire, he noted.

“A joint meeting will also be held between officials with Iran’s Khuzestan province and Iraq’s Maysan Governorate,” he added.

The first fires in Hoor-al-Azim wetland in late June lasted more than 20 days and burned over 18,000 hectares of the lagoon on the Iraqi side.

The people of the southern cities of Khuzestan struggled with the smoke of the fire and it was hard for them to breathe. Since Saturday, the wetland has been on fire for the second time.