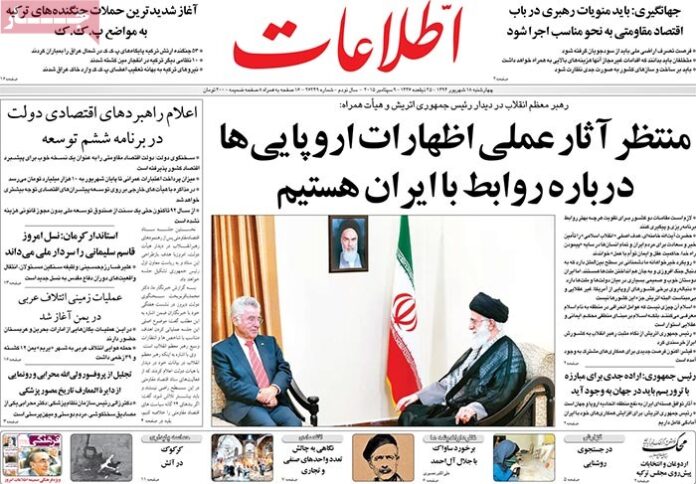 A special look at the headlines Ettela’at newspaper covered on September 9.

♦ “We are waiting for the practical impact of comments by the Europeans on relations with Iran,” the Supreme Leader said at a meeting with the visiting Austrian President.

♦ President Rouhani has called for “strong determination” in the fight against terrorism in the world.

The president told the visiting Austrian president that the nuclear deal [Iran has struck with P5+1] will be beneficial to the region, the European Union and the entire world.

♦ “The ideas of the Supreme Leader on resistance-based economy should be properly implemented,” said the first vice-president.

Eshagh Jahangiri further said that profiteers should be denied the opportunity to grab national land.

♦ Turkish fighters have launched the fiercest assault yet on PKK positions.

Turkish forces crossed the border into Iraq under the pretext of hunting Kurdistan Workers Party militants.

♦ The economic strategies of the government during the 6th Development Plan

The government spokesman said the administration views resistance-based economy as a perfect prescription to advance the country’s economy.

♦ The governor general of Kerman has said that the young generation views General Soleimani [the commander of IRGC’s Quds Force] as a national hero.

♦ The Arab coalition has launched ground operations in Yemen.

The United Arab Emirates, Bahrain and Saudi Arabia have boots on the ground in Yemen.

♦ The services of Valiollah Mehrabi have been praised at a ceremony to launch an illustrated encyclopedia on the history of medicine.