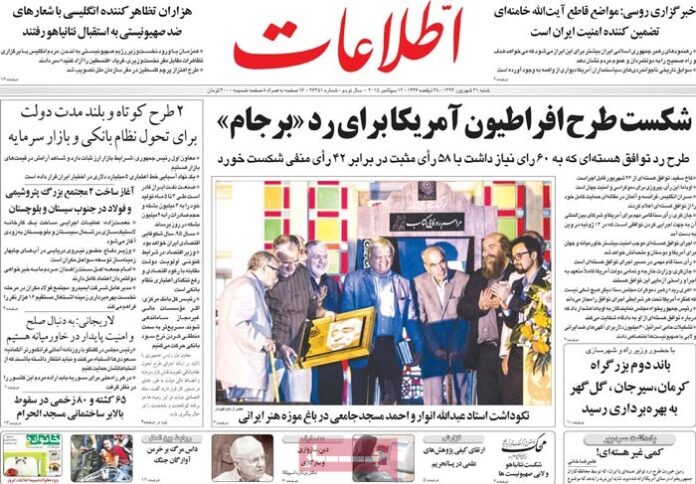 A special look at the headlines Ettela’at newspaper covered on September 12.

♦ A plan by hardliners in the US to defeat the Joint Comprehensive Plan of Action has failed.

♦ A second lane of Kerman-Sirjan-Golgohar Highway has become operational at a ceremony attended by the minister of roads and urban development.

♦ A ceremony has been held to praise the services of Master Abdollah Anvar [a prominent decipherer of ancient scrolls] and Ahmad Masjed Jamei [a former culture minister] at the Iranian Art Museum Garden.

♦ A Russian news agency has reported that the unwavering stance of Ayatollah Khamenei serves as a guarantor of Iranian security.

It came as the United Nations approved a proposal to raise Palestinian flag at the UN headquarters.

♦ Two short- and long-term plans to transform the banking system and the capital market.

An Asian institution is to provide Iran with a $5 billion credit line.

♦ Construction of two petrochemical and steel complexes has started in Sistan and Baluchestan Province.

The industry minister has said that construction of a tire company in the north of the southeastern border province will soon get underway.

♦ The Iranian parliament speaker has said that Tehran is after peace and sustainable security in the Middle East.

In an interview with a German newspaper, Ali Larijani said that the Saudis are erring and that they should not expect us to support their mistakes.

♦ As many as 65 people were killed and 80 others injured when a crane collapsed in Mecca.