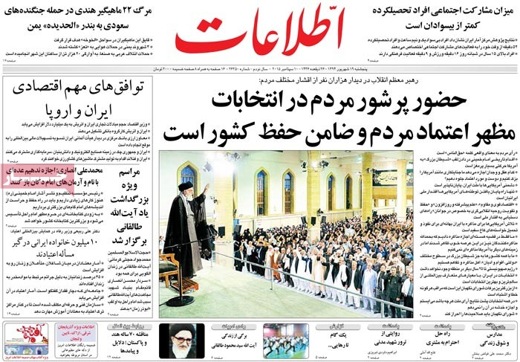 A special look at the headlines Ettela’at newspaper covered on September 10.

♦ “The massive turnout of people for elections will symbolize public trust and guarantee the country’s future,” the Supreme Leader said at a meeting with people from all walks of life.

♦ The extent of social participation of the educated people is less than the illiterate.

Studies by the Statistical Center of Iran suggest that illiterate and educated individuals are engaged in social activity 90 and 52 minutes respectively.

♦ A Saudi airstrike on the Yemeni port city of Al-Hudaydah has left 22 Indian fishermen dead.

Attacks by the Saudi-led coalition on Sana’a have displaced 20,000 residents of the city.

The minister of economy and financial affairs has said that the volume of trade between Iran and Austria will reach $1 billion.

♦ A ceremony has been held in memory of Ayatollah Mahmoud Taleghani, a prominent Muslim thinker and philosopher who passed away in the late 1970s.

♦ “We should not allow certain individuals to hide behind the late Imam to advance their own agenda,” said Mohammad Ali Ansari, the head of the Institute for Compilation and Publication of the Works of Imam Khomeini.

He further said that the country’s largest library will soon be launched at the mausoleum of the late Imam.

♦ “Some 10 million Iranian families deal with the negative impacts of addiction, one way or another,” said the welfare minister.

He further said that 45 percent of inmates are behind bars for offenses that have to do with illicit drugs.