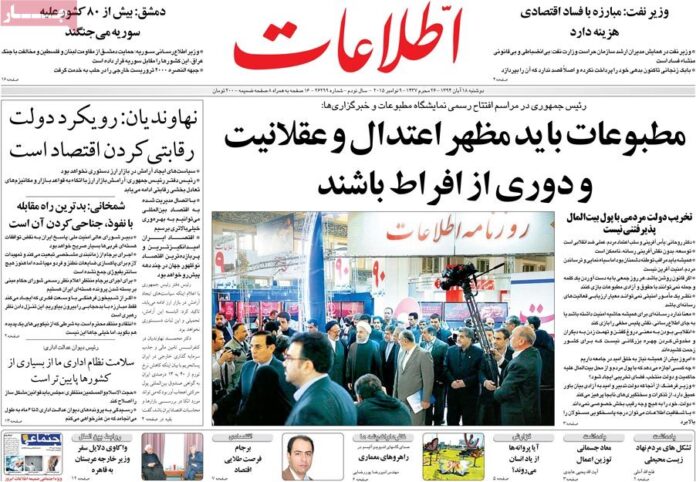 A special look at the headlines Ettela’at newspaper covered on Nov.9.

♦ The press should be a symbol of moderation, prudence and avoidance of extremism, President Hassan Rouhani said.

He further said that lack of discipline and lawlessness breed corruption. “Babak Zanjani [a young billionaire who is on trial for corruption] has not paid back his debts [to the Oil Ministry] and is not about to do so.”

♦ [Militants from] 80 countries are fighting against Syria, said the Syrian information minister.

In another development, the Al-Nusra Front [an affiliate of Al-Qaeda] has recruited 2,000 foreign militants in Aleppo.

♦ The president’s chief of staff has said that the administration’s goal is to render the country’s economy competitive.

♦ The worst way to fight infiltration is to make it a factional issue, said the secretary of the Supreme National Security Council.

Ali Shamkhani further said Iran’s response to the West’s probable failure to comply with its nuclear commitments will be very clear.

♦ The head of the Administrative Justice Court has said that the administrative system in many other countries is healthier than in Iran.