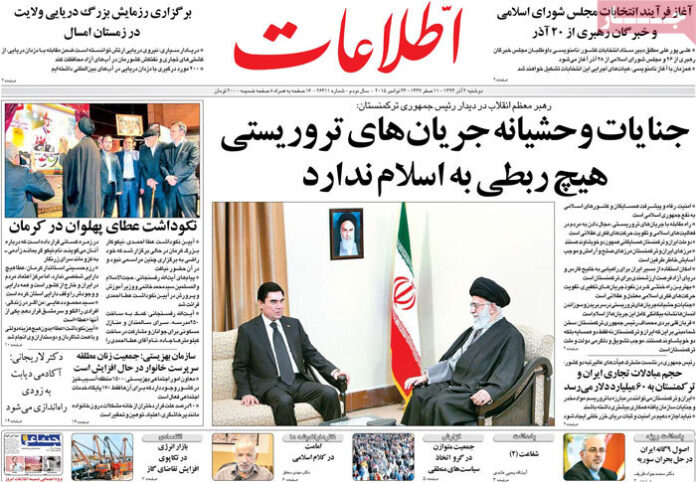 A special look at the headlines Ettela’at newspaper covered on Nov. 23.

♦ The violent crimes of terrorist groups have nothing to do with Islam, said the Supreme Leader in a meeting with Turkmen President Gurbanguly Berdimuhamedow.

♦ The volume of trade between Iran and Turkmenistan will hit the $ 60b mark, said President Rouhani in a joint meeting of Iran-Turkmenistan high-ranking officials.

Iran and Turkmenistan can have more cooperation in the fight against terrorism, drugs trafficking and organized crime.

♦ The electoral process for the Assembly of Experts and the Islamic Consultative Assembly will open on December 11.

Secretary of the Electoral Commission Ali Pour-Ali Motlagh has said that registration for the Assembly of Experts and parliament starts on December 17 and 19 respectively.

♦ A commemoration ceremony was held in Kerman to honor Ata Ahmadi [a philanthropist who has built more than 250 schools, old people’s homes and residential centers and contributed to road projects in Kerman Province].

Messages by Ayatollah Hashemi Rafsanjani, Seyyed Mohammad Khatami and the education minister were read out in the ceremony. Ata Ahmadi was a no-show in the ceremony because he did not approve of the event in the first place.

Mahmoud Doaei [the head of Ettela’at newspaper]: If I wanted to follow the example of certain individuals, Ata would be one of them.

♦ The number of divorced women who have turned into breadwinners of their family is on the rise, said the State Welfare Organization.

A deputy director of the Welfare Organization has said that there are as many as 1,500 hotbeds in the country for which only 170 social centers are active.

♦ A deputy health minister has said that a diabetes academy will be launched [in the country] in the near future.

Recent developments, including two conferences in Vienna, Austria, have put the Syrian crisis on a new track, creating a ray of hope for the first time that one of the biggest human tragedies of our time might come to an end.

Respect for the nations’ right to self-determination, opposition to imposition of the will of foreign players on independent nations, and opposition to arbitrary use of terrorism as a means to secure political objectives are the guiding principles of Iran’s Syria policy, said Foreign Minister Mohammad Javad Zarif in an opinion piece Ettela’at daily published on Monday November 23.