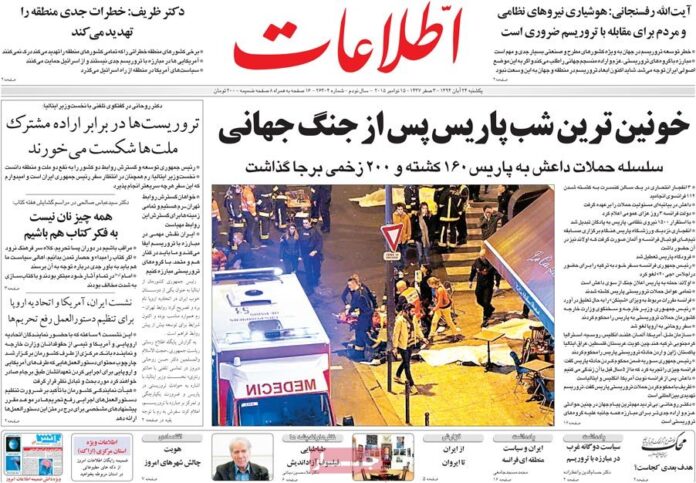 A special look at the headlines Ettela’at newspaper covered on Nov. 15.

♦ The chairman of the Expediency Council has said police and public vigilance is imperative in the fight against terrorism.

Ayatollah Akbar Hashemi Rafsanjani further said the fight against terror requires international resolve and that if Iran’s principled stand had been heeded, the scourge of terrorism might have been less pervasive today.

♦ The Iranian foreign minister has said that the region is facing grave threats.

Mohammad Javad Zarif further said that some regional countries are unable to appreciate the gravity of the dangers that threaten the entire region.

He also said the Americans are not serious in the fight against terror and simply support Israel.

♦ The collective will of nations will overwhelm terrorists, President Hassan Rouhani told Italian Prime Minister Matteo Renzi over the phone.

The president described expansion of ties between the two countries as being in the best interest of the two nations and the region.

♦ Pocketbook issues are not the only thing that matters; let’s think about books and studying too, said deputy culture minister Seyyed Abbas Salehi.

♦ Iran, the US and the European Union have held a meeting to draw up a formula on termination of sanctions.

A panel of Iranian Foreign Ministry’s legal experts and a representative of the Central Bank attended the 9-hour meeting.