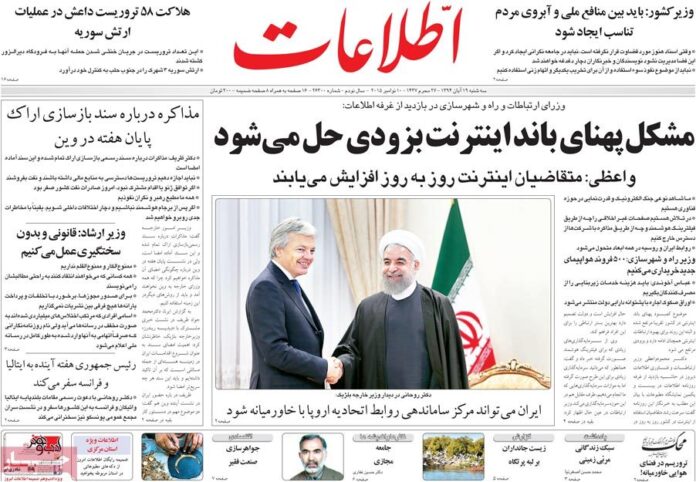 A special look at the headlines Ettela’at newspaper covered on Nov. 10.

♦ The problem of the Internet bandwidth will soon be resolved, said the minister of communications as he visited the Ettela’at stall at the Press and News Agencies Exhibition.

♦ “Iran can serve as a center to coordinate ties between the European Union and the Middle East,” President Rouhani told the Belgian foreign minister.

♦ A balance should be struck between national interests and people’s reputation, the interior minister said.

Abdolreza Rahmani Fazli further said that the issue of infiltration should not be used as a tool for mudslinging and incrimination.

♦ A Syrian Army operation has left 58 IS terrorists dead.

The Syrian government forces wrested control of three towns south of Aleppo from the IS terrorists.

♦ Meetings will be held in Vienna later this week on a contract on the re-configuration of Arak Reactor.

Foreign Minister Zarif said talks on the document are over and it is ready to be signed.

♦ The minister of culture and Islamic guidance has said that his ministry acts in compliance with laws and is not hard on individuals and entities it deals with.

All those who want to air their criticism are writing what they want without restrictions, Ali Jannati said.

♦ The president will fly to Italy and France next week.

The visit comes at the invitation of senior Italian, French and Vatican officials. During the visit, the president will deliver a speech at the General Forum of UNESCO.