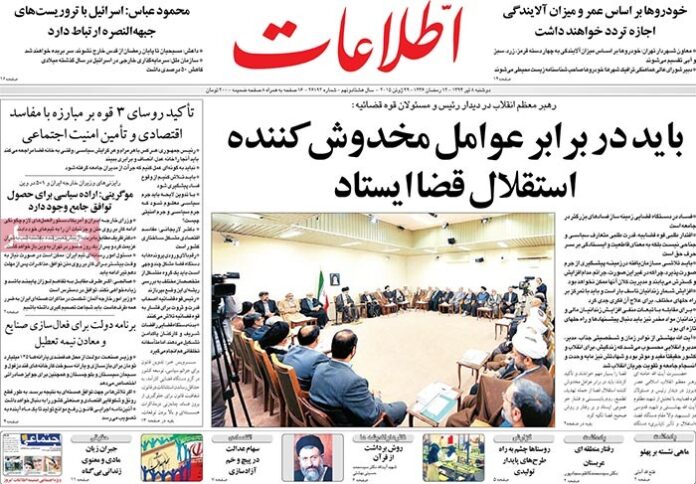 A special look at the headlines Ettela’at newspaper covered on June 29.

♦ “Those who spoil the independence of the Judiciary should be confronted,” said the Supreme Leader at a meeting with senior judicial officials.

♦ Certificate of roadworthiness will be issued based on the vehicles’ age and emission of pollutants.

The secretary of the High Urban Traffic Coordination Council said that vehicles are to be provided with environmental certificates.

♦ [Palestinian Authority President] has said that Israel is in contact with Al-Nusra Front terrorists.

IS terrorist grouping has issued a statement giving Christians until the end of Ramadan [July 17] to leave Quds [Jerusalem] or face decapitation.

♦ The leaders of the three branches of government have underlined efforts to fight corruption and ensure social security.

President Rouhani: “We should not act in a way that may dishearten state managers; we need to strive to prevent corruption.”

Speaker Ali Larijani: “Corruption is a structural problem of the country.”

Judiciary Chief: “The wealthy and those in positions of power are striving to bring pressure to bear on the Judiciary.”

♦ EU foreign policy chief Federica Mogherini has said that there is political will for a comprehensive nuclear deal with Iran.

Her comment came as Iranian Foreign Minister Zarif left Vienna for Tehran on a preplanned return home. He will rejoin the talks Tuesday.

♦ Government is to implement a plan to reactivate mines and industries which are inactive.

If efforts to clinch a nuclear deal produce the intended result, an economic and industrial boom will be around the corner.