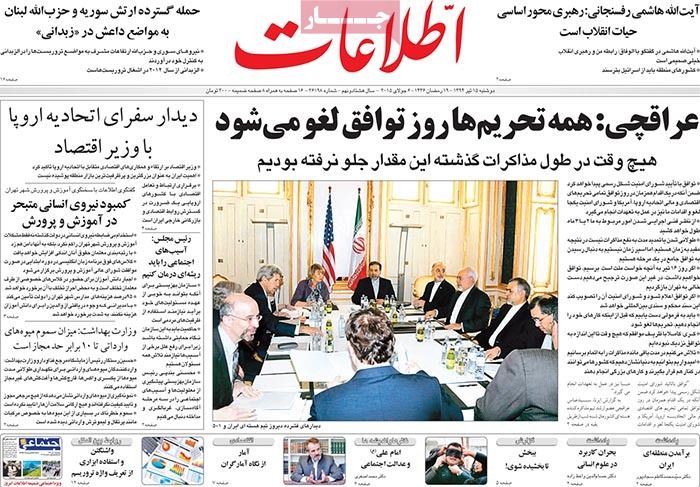 A special look at the headlines Ettela’at newspaper covered on July 6.

♦ “All sanctions will be lifted on the day a deal takes effect,” said Iranian nuclear negotiator Abbas Araghchi.

Araghchi also said that there will be an agreement if the negotiating team clinches what the Iranian people want by July 7, if not, it prefers to return home empty-handed.
♦ Chairman of the Expediency Council Ayatollah Akbar Hashemi Rafsanjani has said that the Supreme Leader plays a pivotal role in the survival of the Islamic Revolution.

In an interview with the Arabic-language daily Al-Vefagh, the former president said he has a very close relationship with Ayatollah Khamenei.

♦ The Syrian Army and Lebanon’s Hezbollah have staged a massive attack on IS positions in Zobdani, which had been under the control of the terrorist grouping since 2012.

♦ EU ambassadors based in Tehran have met with the Iranian economy minister.

♦ “Skilled workforce is conspicuous by its absence in the Education Ministry,” said the spokesman of Tehran Education Department.

“The unregulated hiring initiated by the previous government has not only not solved the problems of the Education Department, but exacerbated them,” he said.

♦ “The root causes of social harms should be identified and targeted,” said Parliament Speaker Ali Larijani.

He further said that the Welfare Organization needs to tap into public potential to be able to fulfill its responsibilities.

♦ The Health Ministry has warned that the pesticides used in the cultivation and preservation of some imported fruits are 10 times the permitted level.