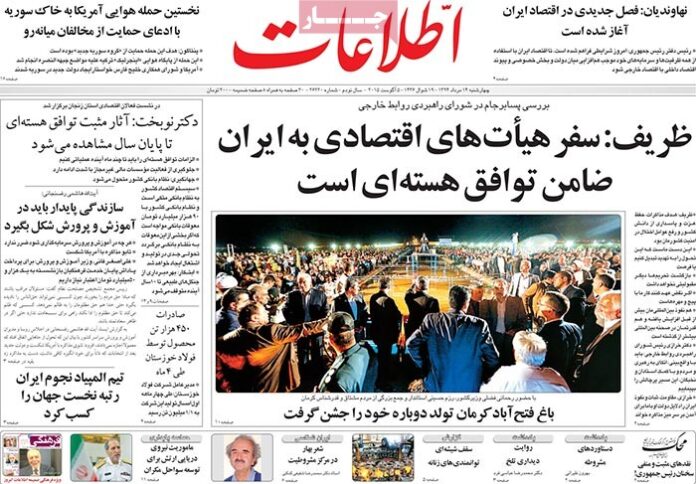 A special look at the headlines Ettela’at newspaper covered on August 5.

♦ “The arrival in Iran of foreign economic delegations serves as a guarantor of the nuclear accord,” said Iranian Foreign Minister Mohammad Javad Zarif.

♦ Fathabad Garden in Kerman has celebrated its rebirth.

The interior minister and the provincial governor along with a number of locals were on hand for the ceremony.

♦ “A new chapter has opened in Iran’s economy,” said the president’s chief of staff.

Mohammad Nahavandian further said that the stage has now been set for the Iranian economy to fully tap into its potential and all available capital to create synergy between the public and private sectors.

♦ The US has launched its first airstrikes on Syria [from Turkey’s Incirlik Base] on the pretext of supporting the moderate opposition.

It came as the US and the Persian Gulf Cooperation Council called for the formation of a new government in Syria.

♦ “The impacts of the nuclear deal will have been felt by yearend [late March 2016],” government Spokesman Mohammad Bagher Nobakht said.

He said the stage should be set within months for the implementation of the deal.

♦ “The foundation of sustainable construction should be set by the education system,” said the chairman of the Expediency Council.

Ayatollah Akbar Hashemi Rafsanjani further said no matter how much investment is made in the education sector, it will be still beneficial.

The managing director of the company said in the first four months of the year, total production in his company has hit 1.1 million tons.

♦ Iran has finished first in the International Olympiad on Astronomy and Astrophysics.