Highlights of Ettela’at newspaper on August 13 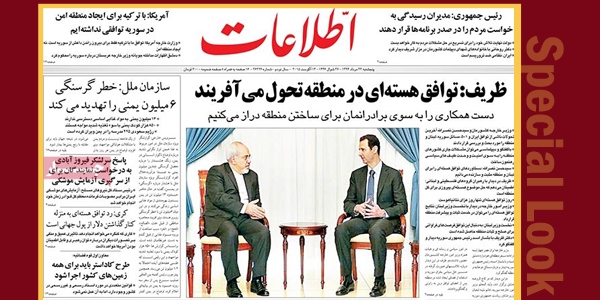 A special look at the headlines Ettela’at newspaper covered on August 13.

♦ “The nuclear deal will transform the region,” Foreign Minister Mohammad Javad Zarif said in his meetings with officials in Lebanon and Syria.

He vowed that his government would try its best to speed up efforts to settle the problems Iranians are facing.

♦ The US has denied reports that it has struck a deal with Turkey to set up a safe area in Syria.

The US State Department has said that the deal in question centers on repelling IS in Syria, not creating a safe zone.

♦ The United Nations has said that hunger poses a threat to 6 million Yemenis.

It also said that 850,000 Yemeni children are facing acute malnutrition.

♦ The chief of staff of the armed forces has responded to a request by MPs on resumption of missile tests.

“In line with the decisions of the Supreme Leader, the country’s missile tests will be conducted all in due time,” Major General Hassan Firuzabadi said.

♦ US Secretary of State John Kerry has said that walking away from the nuclear deal with Iran would threaten the US dollar.

He further said what the US “Congress wants to do will have a profound negative impact on people’s sense of American leadership and reliability.”

♦ “A cadastral map should be drawn for all lands across the country,” said the deputy judiciary chief.

“There are several laws about official and unofficial documentation in the country which are not observed,” he further said.