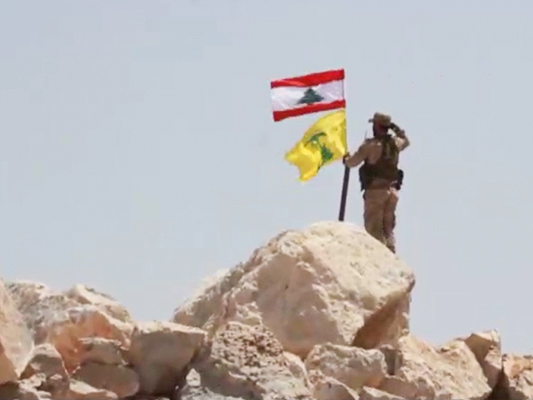 Fighters of the Lebanese Resistance Movement, Hezbollah, have taken down the ISIS flag following a military operation against the terrorists along the Syria-Lebanon borders.

The operation began after the deadline set by Hezbollah Secretary-General Hassan Nasrallah for the terrorists to leave the region expired.

Hezbollah fighters along with Syrian forces carried out an operation against the ISIS terrorists in the border areas between Syria and Lebanon. During the operation over 30 areas were liberated and at least 300 terrorists were held captive.

Hezbollah fighters began their operation against the terrorists in Arsal region on Friday by firing short-range missiles at the positions of Nusra Front militants. They also targeted the road in the mountainous region of Arsal that the terrorists used to transport their weaponry. Meanwhile, the fighters have begun a joint mop-up operation in the region with the Syrian army.

A Farsi report by the Mashregh News Agency says Hezbollah fighters have already cleansed over 30 areas of Nusra Front militants.

The report went on saying that Hezbollah fighters have also inflicted heavy blows on the terrorists in the region, adding they have killed nearly 120 terrorists from al-Nusra Front (also known as Jabhat Fateh al-Sham) and wounded 67 others.

The main point about the operation in Arsal is that a considerable number of terrorists were non-Syrians. There are 6 Libyans, 4 Saudi Arabians, 11 Tunisians and 2 Lebanese among the dead. Meanwhile, Hezbollah fighters managed to hold captive 14 terrorists from regional Arab states.

During the operation to liberate the border region of Western Qalamoun in Syria and Arsal in Lebanon, Hezbollah fighters retook a large swath of areas from the terrorists of al-Nusra Front.

Various valleys in the region have hampered the operation against the terrorists.