Hezbollah chief says movement making drones, rockets on its own 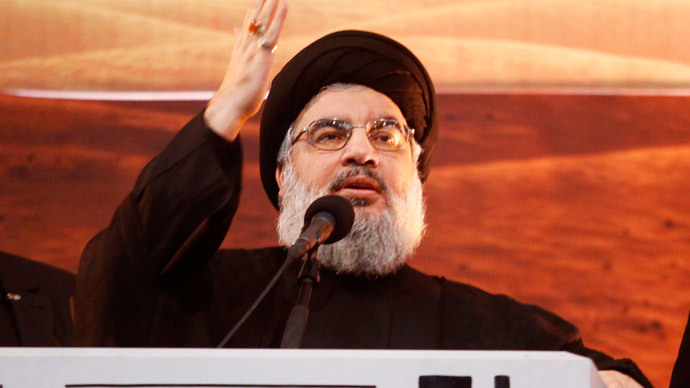 Secretary General of Lebanon’s Hezbollah movement Sayyed Hassan Nasrallah says the resistance group is making rockets and drones on its own and has the capability to turn rockets into precision missiles.

Nasrallah stated in a televised speech on Wednesday that Hezbollah has developed the capability to make rockets and drones on its own.

“We have started manufacturing drones,” he noted, addressing the Israeli regime’s rulers.

“We have been producing drones in Lebanon for a long time and whoever wants to buy them, submit an order,” he added.

Pointing to Israeli threats, the Hezbollah chief said the enemies only threaten others with war but they know it will be very difficult and costly for them. He added Hezbollah is capable of upgrading the quality of its rockets to fend off Israeli threats.

“We have the ability to convert our rockets into precision missiles and we started that years ago,” he said, adding that Hezbollah possesses thousands of rockets that the enemies are unable to locate.

“I tell the Israelis that their ‘war between the wars’ has turned the threat into an opportunity for the resistance,” he stated.

Nasrallah pointed out that in a few months Hezbollah will be 40 years old, stressing the blood of the martyrs has baptized and strengthened the path of resistance.

He made the remarks in a ceremony on the martyrdom anniversary of resistance leaders Sheikh Ragheb Harb, Sayyed Abbas al-Mousawi and Imad Mughniyeh.

Nasrallah said the motto of this year’s ceremony is “Decision 1982.”

He added Lebanon faced a threat of occupation by Israel in 1982, noting that resistance has been the force that protected the identity of Lebanon in face of Israeli threats.

“In 1982, Lebanon was facing a huge threat and on the brink of falling victim to Israeli hegemony. Resistance factions, including Hezbollah, were the ones who protected Lebanon’s identity. The resistance defended this identity with blood,” he stated.

According to the Hezbollah leader, the ideology of resistance in the region began long before the founding of Hezbollah.

Resistance leaders have refused to surrender to the Israeli regime or accept its occupation, Nasrallah continued.

He then denounced the Muslim countries that normalized their relations with Israel, describing the latter as a “temporary regime” which is moving towards its collapse.

“Some in Lebanon and the region imagine that the future is linked to Israel and that’s why they are resorting to normalization with it,” he added.

Nasrallah also said the resistance movement has been gaining victories against the Israeli regime since 1985, adding, “We are facing Israel as an entity that has been weakened and is going downward.”

The resistance is confronting the enemy’s ambitions, protecting Lebanon and supporting Palestine, he said.

Pledging to follow in the footsteps of the martyrs of resistance, the Hezbollah chief noted resistance will keep its vow despite all conspiracies and lobbying.

He pointed out that Israel is the only regime today that has been described as “apartheid,” saying the regime’s officials have confessed that they face a struggle to lengthen the entity’s life.

“The resistance factions in the region, including Hezbollah, believe that the Zionist entity is a fugitive entity that’s falling back,” he added.

He stated there is a lack of confidence in the Israeli army and among its generals.

Nasrallah, however, clarified that he was not underestimating Israel’s power. Yet he reiterated that Israel “is in decline.”

“We encourage the Israelis to leave Palestine and we’re ready to pay for their travel tickets,” he asserted.

He promised the Israeli forces with a second Ansariyeh operation if they try to conduct an attack against Hezbollah’s precision missiles project in Lebanon.

He further elaborated on the resistance movement’s role in Lebanon, saying it only exists to defend and protect Lebanon.

“We insist on strengthening and equipping the army and we also insist that the assistance should not come from a single side,” he stated.

He also underlined the importance of holding Lebanon’s elections on time, saying Hezbollah will definitely participate in the polls.

“Those who are accusing us of delaying the Lebanese parliamentary elections seem to be the ones who really want this delay,” he added.