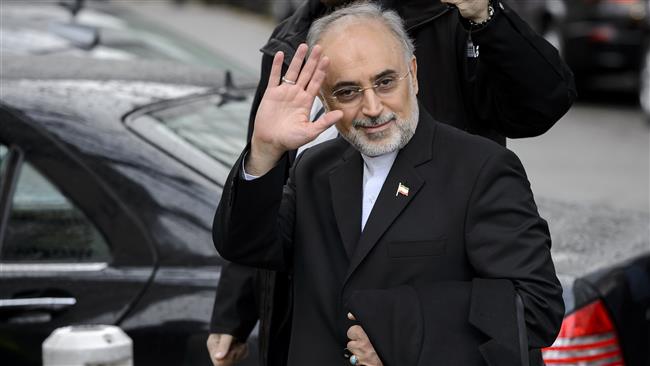 The AEOI chief has said that Iran is now among the few countries in the world that can produce heavy water.

Production of 20 tons of heavy water in the Arak nuclear reactor has solidified Iran’s position as a member of the “world’s nuclear club”, the AEOI chief says.

Head of the Atomic Energy Organization of Iran (AEOI) Ali Akbar Salehi made the comment on national television on Saturday night.

“We took great steps in designing and redesigning the Arak reactor,” Salehi said, noting that Iran is now among the few countries that can produce heavy water, which he called a “strategic product”.

Iran and P5+1 reached a landmark understanding over Tehran’s nuclear program in Switzerland in early April.

According to the understanding, Iran can sell its surplus heavy water after meeting its own needs, Salehi said.

Heavy water is a form of water which contains a higher than normal amount of the hydrogen isotope deuterium, and is used in nuclear magnetic resonance, organic chemistry, and metabolic rate testing among other purposes.

The understanding also stipulates the use of only 5,000 of Iran’s centrifuges, which would produce 2,200 kilograms of enriched uranium every year, the AEOI chief said.

Salehi added that since the mutual understanding was reached in the lakeside city of Lausanne, the talks have entered a detailed stage.

The latest round of talks, held in Vienna, were focused on the issue of sanctions as legal and technical issues were more or less cleared up, Salehi said, adding that most of the ambiguities related to a US-released fact sheet were also solved.

Less than 24 hours after Iran and P5+1 reached a mutual understanding over Tehran’s nuclear program, the US published its own fact sheet detailing the parameters of the Joint Comprehensive Plan of Action (JCPOA). The sheet, however, had differences with the original joint statement.

Salehi further said that Iran could quickly resume full-scale nuclear activities if any of the agreement signatories violates the deal.

The latest round of the talks between representatives of Iran and P5+1 — the United States, Russia, China, France, Britain, and Germany — which ended on Friday, were held with the aim of drafting the JCPOA according to the parameters set through the mutual understanding reached on April 2.

The talks are scheduled to resume on the sidelines of the nuclear Non-Proliferation Treaty review conference in New York on April 27.